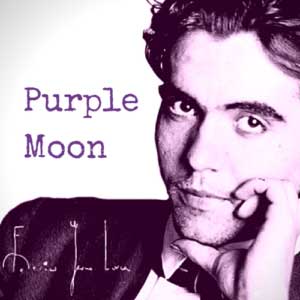 Actors Avi Nassa, Andrew Ward and world renowned guitarist Esteban Antonio, who has been playing the guitar since the age of three, combine talents and collaborate to throw dramatic light upon the intense and shocking life of perhaps Spain’s greatest modern poet, Federico Garcia Lorca.

This play celebrates the genius that Lorca was, 76 years after his assassination by Franco’s facist regime. Avi Nassa wrote Purple moon because he felt that not enough people know the truth behind Lorca’s work and shocking death, especially new generations. Avi Nassa brings a fresh new approch to Lorca’s work and character. During his research, Nassa was helped with information supplied in the book ‘Lorca Assasination’ by Ian Gibson – and would like to thank Gibson for his fantastic research.

Avi Nassa is the artisic director of Whispering Eyes Theatre Co. Actor, writer and magician, he has worked for the past 30 years in all aspects of the media and was nominated for a BAFTA Award. Avi Nassa would also like to take this opportunity to thank Saul Reichlin for his invaluable assistance in developing Purple Moon.