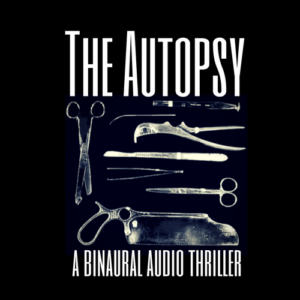 A man under pressure. A heated argument. A fatal heart attack.

This should have been the day Jeff died. Except this time, his death was only the beginning…

This is a binaural recording – best listened to through headphones!

This is a BINAURAL recording and must be listened to with headphones for the full effect.

We suggest listening alone…. in the dark….!

This production is not suitable for under 16′s!

Warning! This is pretty gruesome!! Loved it but perhaps should have braced myself a little more for a play entitled ‘Autopsy’. Great acting.

Completely encapsulating and horrifying! A unique take on the concept of death, utilising the audio format to its advantage. Well acted and well written! Engaging from the beginning right to the end.