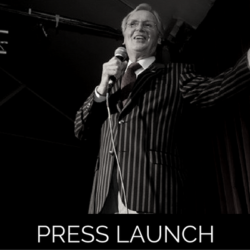 In 2008, Wireless Theatre had its official press launch party at The Headliner’s Comedy Club hosted by comedian and actor Neil Frost. Over 250 people came and a great time was had by all. Performances from In The Meantime and No Cause For A Llama, as well as Davis & McQuillan and a wonderful speech by our patron Nicholas Parsons. The evening closed with the wonderful Richard O’Brien playing Rocky Horror Classics.