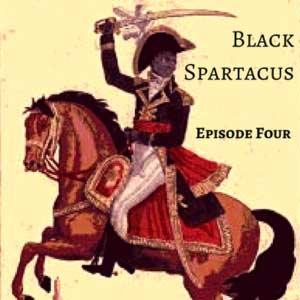 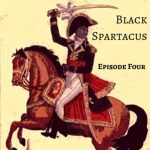 In Episode four of Black Spartacus, as Toussaint’s alliance with the French goes from strength to strength the resentment of the mixed race Mulattoes reaches boiling point. Was their leader, Rigaud, behind the conspiracy to assassinate Toussaint?

After General Laveaux, names Toussaint his Commander-in-Chief, a river has been crossed over which there can be no return. When Dessalines discovers a secret plan for a Mulattoe State, can a bloodthirsty struggle to the death between blacks and Mulattoes be averted?

Soon Toussaint, and his increasingly restless generals Dessalines and Christophe, must face an even bigger threat in the form of an invasion from France’s new leader, Emperor Napoleon, sworn to throwing these “gilded Africans” back into bondage. While storm clouds gather across the Atlantic Marie must take refuge in a cave and undergo the rituals to become a Voudou priestess.

Will the Voudou god, Damballa, finally reveal himself to her so she can take her rightful place as a bold spiritual leader in the struggle ahead?

With thanks to Kay Johnson, Alan Guy, Vivien Guy, Joe Marcell (Board of Thee Black Swan Theatre and Opera Company) and Lucia Hinton and Halo Jones of Art 19 Studios