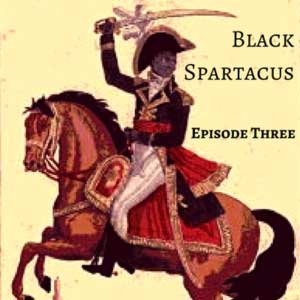 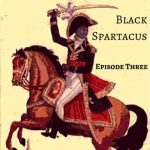 In Episode Three of Black Spartacus as the Slave Uprising consumes the Caribbean colony of St.Domingue, redefining the terms “master” and “slave”, Toussaint L’Ouverture and his rebel army , now encamped in the hills, desperately need supplies to sustain them.

Having joined the rebels, Marie is tormented by the spirits of the dead in her sleep. Could this be a sign that her powers are maturing and she will soon be ready to take her place as a Voudou priestess?  Mambo Cecile thinks so! Enthralled by an impressive young officer, Dessalines, who takes her under his wing, she is increasingly smitten.  But with his enigmatic moods and tortured soul will love between them manage to find a way?

Soon much needed support for Toussaint and his tattered rebel army comes in the form of an offer of an alliance from General Laveaux, leader of the French Army in the Colony.  Should Toussaint accept the alliance, or should he commit himself to fighting to the death with the nation that once dared to call him and his people “slaves”?

With thanks to Kay Johnson, Alan Guy, Vivien Guy, Joe Marcell (Board of Thee Black Swan Theatre and Opera Company) and Lucia Hinton and Halo Jones of Art 19 Studios