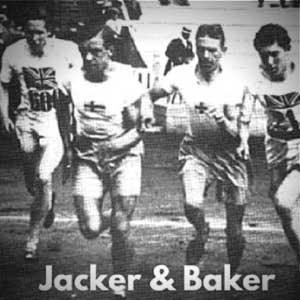 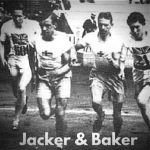 Jacker and Baker, a true story, throws fascinating new light on the famous 1500m race at the 1912 Stockholm Olympics, drawing on the only known copy of the unpublished memoirs of Arnold Nugent Strode Strode-Jackson (in the possession of the author). This audio play is based on the story of two undergraduates (Arnold Nugent Strode Strode-Jackson and Philip John Noel-Baker) who became lifelong friends when they were unexpectedly chosen to represent Great Britain in the 1500 metres at the 1912 Stockholm Olympics.

Jacker and Baker after the 1912 Stockholm Olympics

One went on to be a war hero, wounded in action three times, awarded the DSO and three Bars (a record) and becoming, in 1918, the youngest Brigadier-General in the British Army. The other was a Quaker and a pacifist who created the Friends Ambulance Unit, serving on the front-line in WW1.  Devoting his life to campaigning for disarmament, he was awarded the Nobel Peace Prize in 1959.

Jacker and Baker recounts how the two friends – out-classed, inexperienced and beset with problems – set about preparing to take on the unscrupulous American team, containing the World Record holder, in what has been described as ”the greatest race ever run”.