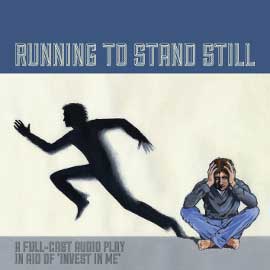 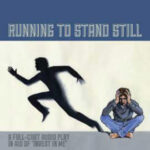 Running to Stand Still is an audio drama about M.E. This is an original 60-minute audio play (with songs), featuring professional actors, with cameos from presenters on BBC Radio 4, BBC Radio Gloucestershire and Sky Arts 1, that deals with the illness M.E. as its focal point. It is written by a sufferer and it specifically addresses what happens to relationships around an individual who is stricken by the illness and should educate those that don’t know much about this life-threatening condition. For those that have experienced the illness (first or second hand), it’s a story you can empathise with. For those who haven’t, it’s a story you can sympathise with.

If you would like to make a donation after listening, the charity is www.investinme.org.

Presented by The OFFSTAGE Theatre Group, in association with Wireless Theatre  (supported by BBC Radio Gloucestershire), and in aid of Invest In ME.

Running To Stand Still first toured around schools and colleges in 1997, exactly 15 years ago, as well as being performed at an International Conference about the illness it was trying to raise awareness of (Myalgic Encephalomyelitis). It also had the distinction of being the first play to be broadcast on BBC Radio Gloucestershire in 1996.

This is a charitable endeavour, which sees all profits going to Invest In ME (www.investinme.org); who are fundraising to set up a research centre into the much-misunderstood and life-threatening disease.

Actor/Director/Writer and M.E. sufferer, Barnaby Eaton-Jones said: “The script was first written in 1992, which makes this the 20th anniversary of that event. But, a lot has changed since then. It was often sad, very frustrating and constantly bewildering to read so much new research since the play was last performed and find that there isstill prejudice, wrong information and lack of knowledge out there in the general public. Hopefully, this play will play a small part in helping to redress the balance.”

With grateful thanks to Nick Bull and BBC Radio Gloucestershire