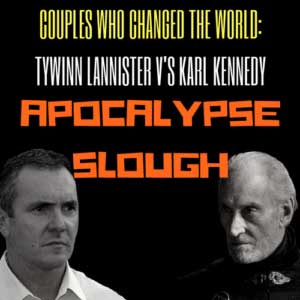 A new black comedy, which exposes the dangers of post-apocalyptic world orders led by Dr Karl Kennedy from Neighbours and Tywin Lannister from Game of Thrones. Recorded live at The Pleasance King Dome as part of Wireless Theatre’s ‘Couples Who Changed The World’ season at Edinburgh 2014.

Recorded live at The Pleasance King Dome, Edinburgh Festival 2014 as part of the Wireless Theatre’s Couples Who Changed The World series.

By: Rebecca Boley and Jonny McCartney