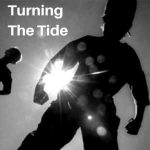 Ever since he was young, Larry has tried to avoid confrontation. Recently widowed, he tries to be a good father to his son Toby. When Toby is suspended from school for fighting a bully Larry faces a dilemma: how can he be a good father in Toby’s eyes if he doesn’t stand up for him? At the same time his work colleague Sarah faces constant harassment from her overbearing boss Robert. Which situation will make him fight back first, or will it be an untimely mix of the two?

Turning the Tide was an effective piece that I enjoyed very much. Compelling all the way through. It was about something real that most of us go through at some point in our lives–dealing with people who bully us in one form or another, or who bully someone we know.