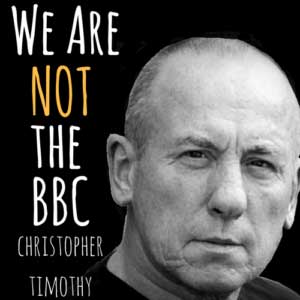 Wireless Theatre Company Audio Drama
We Are Not The BBC

Christopher Timothy comedy audio play. A light-hearted look at the radio drama production process as seen by the members of an amateur dramatics society in a sleepy suburb of Swansea. It can’t be that difficult to make your own play for radio can it? And with a LAMDA-trained professional actor at the helm, surely nothing could go wrong?

After their attempt at Mike Leigh-inspired improvisation doesn’t exactly produce satisfactory results, things start to look up when a visiting celebrity agrees to step in and play the lead role.

‘We Are Not The BBC’ has a sequel! Download ‘WE ARE THE BBC’ STARRING STEPHEN FRY HERE