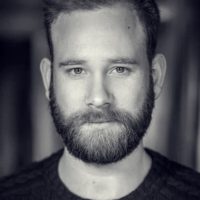 Richard graduated from ALRA in July 2008.

Listen to Richard in: 2010 Space Commander!, The Autopsy, The Passenger/The River