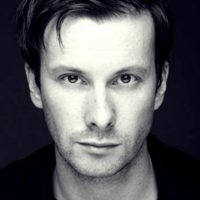 Andrew graduated from the Royal Scottish Academy of Music and Drama with a BA in Acting.

He was nominated for ‘Best Newcomer to the Scottish Screen’ for his performance in Return at the Edinburgh International Film Festival (EIFF), and received three nominations for the stage production of Hotel Confessions, in conjunction with the Southwark Playhouse, at the Off-West End Awards. Andrew played the Doctor in the revival of David Storey’s Early Days at the Finborough Theatre.

Andrew is a long standing collaborator with Secret Cinema, and his voice-work includes voice overs for: BSkyB, Macmillian, Expedia and Scottish Power.

Listen to Andrew in: The Grimm of Stottesden Hall, Burke & Hare