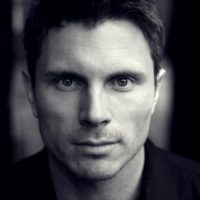 Adam is an East 15 Acting School graduate whose credits include playing Rob Sterling-Davis in We Are Not The BBC alongside Stephen Fry for The Wireless Theatre Company as well as playing a large variety of roles in NewsRevue at the Canal Cafe Theatre, mocking and impersonating a great number of celebrities and politicians alike; all in good fun of course.

Other credits include playing Romeo in Pawnorgraphy by award winning writer Tracey Keeling at the Rose Theatre Bankside; George in The Master’s Boy at the Oval House Theatre; Alex in the UK premiere of 3 Way at the Etcetra Theatre and Macduff in the Young Shakespeare Company’s recent tour of Macbeth.

Adam’s other work includes voice-overs, several short films and not forgetting a couple of adverts, neither of which will be mentioned here. Adam’s most recent performance was in the latest production of Comedy News Hour at the Leicester Square Theatre making light of all the topical news stories from home and afar. As a radio drama actor, Adam has most recently performed in Amok  and Black Beauty – both Wireless Theatre productions for Audible UK as well as Crooker’s Kingdom, a live recording at Cromford Mills for Halloween.

Listen to Adam in: We Are Not The BBC, We Are The BBC, Stage Fright 2012, Crooker’s Kingdom, Adam, Eve & Eric, A Gentleman of My Own Making, Apocalypse Slough, Burke and Hare, Life At Death’s Door and Mr Ten Days.