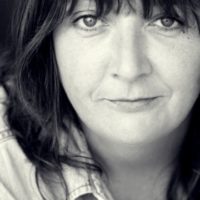 Ashley starred in The Suicide at the National Theatre, working once more with Nadia Fall who previously directed her in Our Country’s Good and Home. She appeared in a rare revival of Shopping and Fucking directed by Sean Holmes at The Lyric Theatre.

Ashley played Margaret Brotherton in Lyndsey Turner’s National Theatre production of Light Shining in Buckinghamshire. She was critically lauded for her portrayal of Falstaff in Phyllida Lloyd’s all-female Henry IV at the Donmar Warehouse in 2014.

“A magnificent Falstaff…she is glorious. A one-person vindication of the all-female enterprise. If it were needed.”

“Ashley McGuire is a superb Falstaff, mixing the predatory swagger of a wheeler-dealing geezer with notes of vulnerability”

Listen to Ashley in: RADIO HOO HAH, THE SPRINGHEEL SAGA, NOT TONIGHT CALIGULA