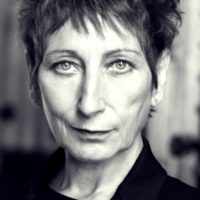 Fiz Marcus is an accomplished actress with many years of experience on stage and screen. Her stage work includes West End, Number 1 Tours,  Regional Repertory, and Fringe. In April 2014 Fiz Marcus was nominated for an ‘Offie’ for Best Supporting Actress for her role as Elena in ‘Occupied’ at Theatre 503.

Fiz has appeared at The Finborough Theatre as Jachne – Braine; the gravedigger’s wife in Treasure.  Other work in 2015 included Esme in Amy’s View and Marian Palmer in Sweet Revenge as part of the Windsor Theatre Royal 2015 Summer Rep Season, Sandra a supermarket worker in Stained for Braine Hownd Films and voicing the latest TV commercial for Acorn Stairlifts!

In 2013 she played Dottie; a 65 year old tough working class American in Good People at The English Theatre Frankfurt and Mrs Robinson a society palm reader in her early 50s in the South East tour of In Extremis. In 2012 she appeared as Maggie, a middle aged ‘tart with a heart’ from Selby Yorkshire in the feature film Heckle for Comedy Girl/Palm Tree. Earlier that  year she played Hester the middle class magistrate in The London Classic Theatre Company 2012  UK & Irish tour of Equus, and in  2011 she was seen as Mam – Alan Bennett’s ageing mother in the No 1 tour of The Lady In The Van.

Fiz’s TV credits include Brenda, a care worker with Dot Cotton in EastEnders and a Serbian receptionist in a brothel in Skins. Other screen work includes Holby City, Jekyll, Mayo and The Amazing Mrs Pritchard, as well as feature films Heckle, Jaypen Code 20, Swinging With The Finkels, Suzie Gold, The Penalty King & Leon The Pig Farmer.

Fiz Marcus is an accomplished playwright, and has written several audio dramas available on the Wireless Theatre site; We Can All Dream, Can’t We?, I’m Waiting for Father Christmas and Silver Wedding.

Listen to Fiz in: Silver Wedding, We Can All Dream Can’t We?, I’m Waiting For Father Christmas, Battle Cries, Amelie’s Party, Not Tonight Caligula, Blood and Stone and Mr. Ten Days