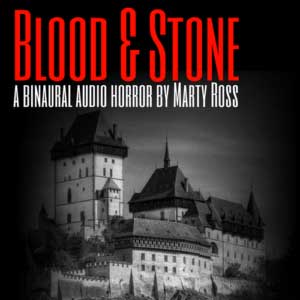 Blood and Stone is a 3D binaural horror audio play from Marty Ross based on the true story of Countess Elizabeth Bathory. Bathory was perhaps one of the most prolific mass murderers of all time. She was a woman who tortured and killed over 600 young women for their blood.

Too noble to be executed, in 1610 the ‘Bloody Lady of Cachtice’ was bricked up in a set of rooms in her own castle in Slovakia. Why then should the young and beautiful Katya be at the castle door attracting the close attention of the gaoler and wanting a job looking after Countess Bathory? Is it revenge or some more ghostly visit from Bathory’s past? And if she should help her escape….

OTHER AUDIO DRAMAS BY MARTY ROSS: MEDUSA ON THE BEACH, CROOKER’S KINGDOM, Night of the Orchid AND REDDER THAN ROSES