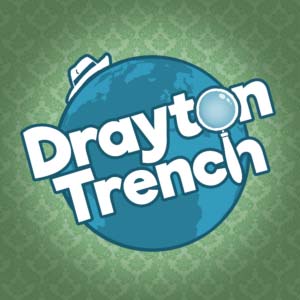 When you’re in desperate peril and working to a tight budget, there’s only one woman for the case – Drayton Trench! The diminutive detective and her plucky secretary Marjorie Marjoribanks are on the trail of drunken archaeologist Sir Percy Price, kidnapped for his knowledge concerning the fabled lost Tomb of Caesar.

Their journey will take them all over Europe, from a fight at the top of the Eiffel Tower to a showdown in the centre of Rome, as they do battle with a sadistic assassin, a Transylvanian Countess, and a gaggle of mad classicist cultists!

We are so excited to have teamed up with SnatchBack to bring you a brand new live recording of a six part audio comedy written by the creator and head writer of acclaimed podcast sitcom Wooden Overcoats.

Recording will take place at London’s top comedy theatre, The Museum Of Comedy. We’ll record two episodes a night over three nights – you can either come to one recording, or why not treat yourself to all three nights and get a discount? (We anticipate this show selling out, so do book early to avoid disappointment)