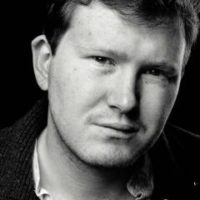 Matthew Woodcock has appeared in Agamemnon and The Winter’s Tale (Library Theatre, Manchester), Phoebe in As You Like It (Contact Theatre) and Roderigo in Iago’s Little Book of Calm (Theatre 503). He has appeared in Room 101 for Rival Theatre Company at the Etcetera Theatre, and wrote and starred as unlikely secret agent The Crooner at the George IV in Chiswick.

Matthew appeared as Ben in The Universal at the Etcetera Theatre, Bernard in Grand Guignol for Theatre of the Damned and Jean Pierre Le Poulet in Wireless Theatre Co.’s The St. Valentine’s Day Murder. He was the Narrator for Morgan and West’s critically acclaimed show Crime Solving Magicians at the Gilded Balloon, Edinburgh, and played Peter Cushing in The Gentlemen of Horror by James Goss. Matthew can be regularly heard as the voice of ex-big game hunter and whisky enthusiast Roy Steel in The Monster Hunters.