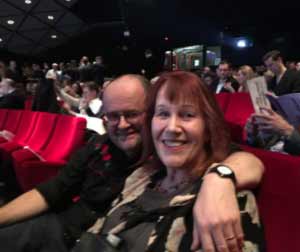 We had a fantastic time at the annual Audio Production Awards gala night held at the BFI. Team WTC were nominated for three awards, so as you can imagine we were very jolly indeed.

David Beck was nominated for Best Drama Producer for his work on Treasure Island and Just One Damned Thing After Another for Audible, as well as his various productions for WTC in-house.

Joe Richardson was nominated for Best Sound Designer for his work on Treasure Island, Just One Damned Thing After Another and also for his endless sound design skills on a multitude of WTC projects.

Matt Thompson was also nominated for Best Sound Designer for his work on A Christmas Carol, Black Beauty and various other Wireless Theatre/Audible projects.

The competition was very high and Trevor Nelson hosted a brilliant evening, with guest appearances from Tony Blackburn and even Ed Milliband. We were thrilled that Matt Thompson won the SILVER award for Best Sound Designer – very well deserved for all his wonderful, detailed work with us for Audible.

Looking forward to next year already – congratulations to all the winners!