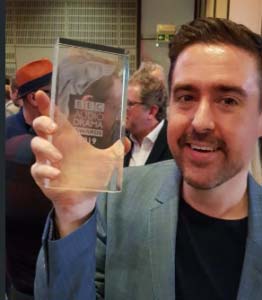 We were completely thrilled to win ‘Best Online Audio Drama’ at the prestigious BBC Audio Drama Awards on Sunday 3rd February, for our audio series RED MOON – written, produced and directed by the fantastic Robert Valentine.

Robert Valentine, Mariele Runacre-Temple and Red Moon’s leading man Philip Bulcock attended the glamorous event at BBC Broadcasting House. We were honoured to be nominated, and shortlisted with the fantastic ATA Girl (Big Finish) and Tracks: Strata (BBC Radio 4), and over the (red) moon to actually win!

Thank you so much to the BBC for the recognition, and watch this space for exciting new audio drama releases!

Episode 1 of RED MOON is free to stream HERE.

Episodes 2 – 6 can be downloaded as follows: