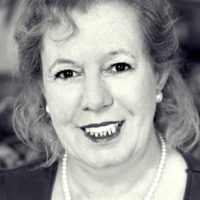 Carrie Cohen has played lead roles at The Kings Head, Jermyn Street Theatre, The Bridewell and The Latchmere.

She worked with Ken Campbell’s improvisation troupe at The Inn On The Green and The Royal Court Theatre where she gave her acclaimed impression of The Queen amongst other characters.

Her  film credits include Mrs. Nelson – the ghastly mother-in-law in Hellbreeder, the ditzy mother of the groom in Road and the deceptively kind Mrs. Obadiah in the horror film Gnaw.

Her distinctive voice has been used in a number of films and on radio, including the voice of Princess Margaret.  See and hear extracts of Carrie’s work at www.carriecohen.co.uk

Listen to Carrie in: Laying Ghosts