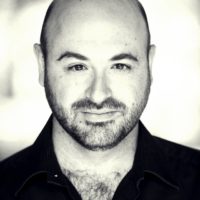 Gareth graduated from Mountview Academy, and now works as an actor and a family entertainer.  Gareth spent most of 2015 touring internationally as Shylock in The Merchant of Venice for TNT/ADGE. Then ended the year in the most pleasing way; as Ronaldo Ratface alongside Roy Hudd in Dick Whittington at Wilton’s Music Hall.

For many years Gareth was part of musical comedy sketch group No Cause For A Llama performing frequently in London, including at The Wireless Theatre’s press launch in 2007.  Gareth has had a very varied career on stage, film and entertainment.

Listen to Gareth in: Pig In Boots, No Cause For A Llama Musical Comedy