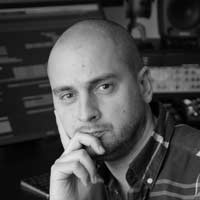 Francesco Quadraruopolo is our go-to person for composing music for audio drama. The musical genius behind many of Wireless Theatre’s best loved productions, he created the epic soundtrack for The Springheel Saga, among many other award winners. Francesco’s music has transformed many audio productions into compelling, immersive experiences. So, how does he do it? We interviewed him to find out.

What inspired you to pursue a career in music composition and production? When did you first start writing music?

I grew up in a musical household with an eclectic mixture of styles. I would listen to my sister playing Chopin, Verdi and Schubert one minute then play duets with my father the next, on songs such as “El Condor Pasa”, “Sound of Silence” and “Oye Como Va”. I had instrumental lessons from a young age, which led to me attending a conservatoire.
We travelled a lot due to my father’s work, so I developed an appreciation for many styles and genres of music. Being the creative type, I started writing music quite early and by my teenage years I was experimenting with production in a rudimentary basement studio.
The passion for composition and production really flourished in my university years. The curriculum was varied and although I specialised in music technology and composition (lots of recording and music production), I also took part in the more classical ensemble performances such as the orchestra and choirs. I found that using music to express moods and feelings came naturally and effortlessly to me. It was extremely fulfilling and liberating and it quickly became a habit, a sort of safe, happy place, my own world.

How did you become involved with Wireless Theatre, and in composing music for audio drama?

About twelve years ago, I had an amazing piano teacher, Borimira. We had a wonderful and special relationship, a strong spiritual bond. She was my teacher and mentor, but also a big admirer of my music.
One day she was asked whether she knew a composer for a project, “Medusa On the Beach” and she immediately thought I would suit the role perfectly. I met with Mariele (and at the time, Fran) in a pub in Soho. It was right at the company’s (and mine) very beginnings but I was immediately intrigued with the story and the whole concept of audio drama.
That was my first project with Wireless, Mariele loved the soundtrack and I’ve been working with them ever since.

Which has been your most exciting project so far?

Wireless produces so many amazing things, it’s difficult to pinpoint one.
Amongst some that really stand out are award-winning “Springheel’d Jack” by Gareth Parker and Robert Valentine, which is a dramatisation of one of Victorian London’s urban legends.
It’s an incredible production, like diving in a magical, dark past. The cast, the acting, the writing and of course the direction – just unbelievable! The music is not bad either.
I was also really excited to work on the LZS Audible production for the “Jungle Book” and I consider myself really lucky to have had the opportunity to work with amazing talent such as Bill Bailey, Richard E. Grant, Martin Shaw, Colin Shaw… the list goes on and on. It’s just been an incredible privilege and I’ve learnt so much at every turn!

What advice would you give to aspiring composers?

Learn.
It’s about constantly learning. Learning your craft, how to listen to the story’s needs and to the directors’ requirements as well as learning about music from all over the world in order to broaden your horizon and widen your sound palette.

Your work includes audio composition, arrangement and production. Could you tell us a little about how you approach these parts of your work?

I love using orchestral instruments and coming up with the small seed, which is the melodic idea.
This is really the most exhilarating part of the work, where you have a blank canvas and your mind can really connect with the story to conceive a thought, sound or an idea.
For me, it’s here at this early stage where the project’s musical identity starts to form – if you get it right you can really elevate the listener’s experience without becoming too intrusive.
Nowadays, we are no longer limited by space or means and composing is accessible to anyone. That means that it really comes down to your original ideas and talent. Feeling like you’ve given birth to something new is a unique and wonderful experience. Once that part is done the fun lays in experimenting with arrangements, harmonic context and morphing, to ensure the music suits the scene. This is why I rarely use templates, I like to work from scratch and not constrict myself, it is much more rewarding this way as you can create music that is truly bespoke and ultimately works closely for and with the project. It takes a lot longer but the outcomes are more unique and gratifying when you are building from the ground up.
Equipment isn’t that important nowadays as most programs have the same functionalities and features. There are tons of DAWs out there, so it’s really about your affinity and preference. The same goes for software instruments and effects. As with any craft, it’s about how you use the tools you are given.

Are there any unusual challenges in composing music for audio drama compared to composing for other media?

For me, the biggest challenge is ensuring that your music evokes the visual imagery that you would have in a medium such as film. Music has to suggest not only feelings and moods but also colours, shapes, light, movement and everything else that, in a film, would be depicted by images. All the while supporting the script and actors, without becoming too intrusive for the listener. The trick is to find the right balance.
Of course the above is true for film too, but with audio you have to make up for the lack of pictures – some listeners prefer it this way as it allows them to form their own images, without distraction.
Another challenge is often space. In audio, there is rarely much dedicated space for music alone because time has to be filled with dialogue and this is just the way it has to be. Again, finding the right equilibrium is key.

You have composed and produced award winning music for many forms of media. Do you prefer video or audio as a medium? Is your overall process the same, regardless of media?

I love both and the process is very similar.
As I was explaining earlier there are challenges in audio, but on the other hand, music can often become secondary in film, where our minds can be completely immersed in the visual, so there are pros and cons to both. What I can say is that often, my favourite part of the job is writing the opening and closing themes as you can really be as free, creative and dramatic as you want. In the end, you are telling a story with music and this can be done just as effectively for both mediums.
Both provide extremely rewarding work and I find that, no matter the medium, music is always highly appreciated on an emotive level.
The gratitude and excitement from the writers and producers when they hear their work accompanied by music is always very touching and heartwarming. No matter the media, the whole process is driven and fueled by love and dedication (and sometimes, very tight deadlines :)).

Yes, VERY exciting, but I’m not sure I am allowed to talk about them. There is always an element of confidentiality before a project start and that is… “elementary, my dear!” ;). (ed: Is that a clue? I think it might be!)