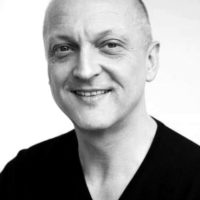 David Benson is a self-taught artist who has built a career as a solo entertainer of distinction, alongside a more mainstream career in theatre (Nicholas Hytnerʼs National Theatre hit One Man, Two Guvnors) and television (Doctor Who, Goodnight Sweetheart (as Noel Coward), Little Britain).

His first solo show was devised with the aim of kick-starting a career that had yet to take off. Think No Evil of Us: My Life With Kenneth Williams took the Edinburgh Fringe by storm in 1996, going on to tour the UK for a year and playing a season at The Vaudeville in Londonʼs West End. Benson still retains this now-classic one-man show in his touring repertoire.

His next solo show Nothing But Pleasure (aka Mourning Glory) in 1998 was a provocative attempt to examine and recreate the funeral of Diana, Princess of Wales. Benson was invited to perform the show at the Sydney Opera House as part of the 1999 Sydney Festival.

A hiatus from performing lead to the 2001 classic To Be Frank: Frankie Howerd and the Secret of Happiness, which used Bensonʼs reflections on his own period in the wilderness to illuminate Howerdʼs roller-coaster career . This show also lead to the offer to devise and direct an autobiographical solo show for the broadcaster Janet Street-Porter, All the Rage!

Listen to David in: THE SPRINGHEEL SAGA, SPOOK SQUAD