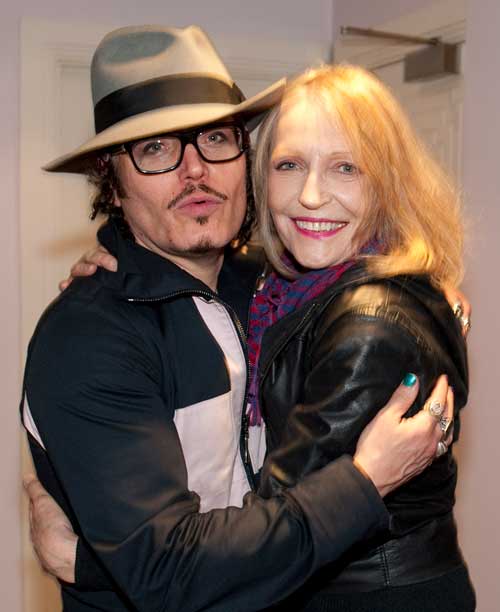 Last week there was a showing of Jubilee by Derek Jarman, at the newly launched Society Film Club, which takes place every Monday in the basement cinema of the Sanctum Soho Hotel.

Love Brandish who runs the Club asked me if I would be willing to go along and do a question and answer session after the showing of the film. He told me Adam Ant would be there too and was going to sing and play guitar afterwards.  So on Monday off I went to the showing, which turned out to be a very glamorous event!

After watching  ‘Jubilee’, which I must confess, I hadn’t seen for some time – the question and answer session began and of course, it brought back a flood of memories of filming with Derek Jarman and the rest of the cast.

I had known Derek for quite a while before I worked on ‘Jubilee’ – I had met him through Andrew Logan, a friend of mine and I had in-fact already been in one of the original Super 8 films that Derek made, which had been shot at the home/studio of fashion designer Rae Spencer-Cullen. When Derek had the idea of making ‘Jubilee’ – he asked me if I would be interested in working on it, of course I was!

Derek had seen Adam Ant walking down London’s Kings Road in a dirty white shirt ripped to show the word “Fuck” that Jordan had carved on his back with a razor blade! Adam had been on the way to Seditionaries – the shop owned by Vivienne Westwood and Malcolm McClaren – around which the whole punk movement had blossomed.  Derek had immediately asked him to be in the film.  Derek and I had both seen one of the very first ever Sex Pistols concerts performed on stage, during which Johnny Rotten had turned his back on the audience growling and spitting into the microphone and where Jordan and Vivienne Westwood had both thrown themselves about with wild abandon hurling insults at the audience and the band.  Jordan had on her geometrical makeup with a great mauve swath of colour across her face and her bondage shoes as she gyrated and bad mouthed her way onto stage, where she and Johnny Rotten proceeded to strip.  This was on Valentines Day 1976 at our mutual friend Andrew Logan’s studio, and Derek filmed the whole event on his Super 8 camera.

I had several pre-production meetings with Derek discussing various options regarding my dual roles of Bod (queen of the anarchists) and Queen Elizabeth 1st of England, whose spirit comes back, together with her Court Astrologer, John Dee (played by Richard O’Brien, the creator of The Rocky Horror Show) to see the state of her beloved England in the “shadow of her time”.  And of course it is in a state – a bitter wind is blowing through the times, the economy is in free fall, punks are running wild and anarchy is rife!  Sound familiar?

England was indeed in a great state of change in the mid 70’s –  the, by now comatose, hippies had had the rug pulled from under their feet by a gang of King’s Road fashion anarchists who called themselves Punks.  These fashionista punks, originally led by Vivienne Westwood and her husband Malcolm McClaren, all gravitated to their King’s Road shop.  And it was here the music business found them to create yet another working class myth full of working class heroes.

Vivienne was reputed to have hated ‘Jubilee’, in fact she made a t-shirt lambasting everyone connected with it, particularly Derek and me.  The only people she liked were Adam and Jordan.  I managed to get a t-shirt for myself and wore it with pride.

Derek had a large studio in Butler’s Wharf which was at Shad Thames (now full of office buildings) and most of the meetings were there.  All along the river the property developers were active and throughout 1977 the warehouses, mostly inhabited by struggling artists, continued to mysteriously go up in flames.  Artists were throwing original work out of windows in the hope of saving at least some of it.  Diane Logan – Andrew Logan’s sister in law, who was herself an established hat designer – lost all her back collections of hats!  The very desolation of the area, fringed with rotting estates and closed shops mirrored to perfection the desolation Derek was portraying.  Derek’s studio was large and stark, with no TV or other modern conveniences, all the rooms knocked into one large space – including the toilet – which stood boldly naked and in solitary splendour on a small platform, completely unadorned by any kind of modest screen, in the very middle of the room!  And that was how you had to use it – needless to say lots of people sat there cross-legged!

Derek was a great historian, having taken a degree in History at Kings College, London, along with a subsequent Art degree at the Slade College of Art. He particularly liked Elizabethan history and knew an enormous amount about it, especially the Court Astrologer John Dee. Derek knew masses of information about the language of flowers and herbs and he brought all this knowledge to the film.

I felt I knew how to play Queen Elizabeth fairly well, but the character of Bod, who represented anarchy and revolution and whose name was indeed a shortened version of Boadicea, was more of a challenge.  We didn’t really have much rehearsal, we would just rehearse before the take but Derek and I spent hours talking about the characters and how they would behave and what would happen to Bod at the end of the movie.  Once we decided on Bod’s outfit –  the character slipped into place.

We started filming in a space at Shad Thames – this space had been built and painted and made into an anarchic rubbish strewn, graffiti covered set by a young film student called John Maybury, who subsequently went on to become the well-known film director of films such as ‘Love is the Devil’ a much acclaimed film about Frances Bacon and ‘The Edge of Love’ which was about the ménage a trois in the life of Dylan Thomas.  John working together with Kenny Morris, the drummer of The Banshees, built the set in the building next door to Derek’s studio with rubbish which they brought in from skips.

The first scene we shot was one well into the film, when Toyah Willcox supposedly carves into my back with a knife.  The scene looks so real I can hardly look at it now, but in fact it was a trick knife that pushed up and coloured red liquid came out of it.  Toyah had been working at The National Theatre and was tipped as a red hot young actress – at this point she hadn’t made her name as a singer although she did have her own band and played live gigs. Also in this scene is Jordan – who gives a great performance as herself,  Hermine Demoriane – who was a French tightrope walker and chanteuse as well as Karl Johnson and Ian Charleson.  This was a very difficult scene to do, both acting wise  (with my back being cut up) and the fact that it was the first scene to be shot in the film. I was also half-naked.  To make matters worse a really fit and handsome young man who was acting as a “runner” on the film had the youthful cheek to tell me that I sounded as if I was reading my lines!  Not a good way to build confidence on the first day of a shoot!

As the shooting progressed we all started to visibly relax. The locations were the streets and warehouses around where Derek lived, we all knew them quite well and many of the cast knew each other. It was shot in a fantasy documentary mode that was very much Derek’s own way of filming and it mixed the real with the fictional.  Derek was always calm to work with and the film progressed fairly smoothly despite the fact the technical resources were somewhat sparse as we were working on such a tight budget. Nevertheless we all worked very hard and enthusiastically and the film was made relatively quickly (shooting went from late June to mid August).

There was also the constant worry that the filming would be stopped, that the authorities would halt proceedings because proper permission to film had never been obtained.  We did not even have permission for the scene that is shot in front of Westminster Cathedral in Victoria, we arrived extremely early in the morning about 6am as soon as it was light enough to film,  shot the scene in a few minutes and then all disappeared!

In fact, the only scene where we really let our hair down and partied was in the final seething, writhing scene which was largely choreographed by Lindsay Kemp and is supposed to be set in the bowels of Westminster Cathedral but it is in fact set in the Catacombs Club just off the Fulham Road.

Fuelled by Drink and Drugs

The whole of this scene was acted exclusively by friends (apart from Lindsey Kemp’s own dance troupe) and of course blind Orlando who gives a riveting performance as Borgia Ginz the music impresario.   The scene lasted all day and was fuelled by such vast quantities of drink and drugs that by the time a wrap was called most of the cast needed a day or two to recover.  It was in this scene that Donald, a young American actor who was playing the role of a policeman in the film, had to have a fight with Adam Ant.  Donald was so drunk (as everyone had been drinking all day) and Derek was so anxious to make the film look authentic that Adam was nearly knocked out.

After that we had to go on location to Dorset to record the final scenes of the film.   The weather was suddenly glorious and as we drove down we felt as if we were going on holiday.  I was lucky enough to drive down in Mody Schreiber’s fathers’ Rolls Royce together with Jordan, Little Nell and Toyah.  Of course Mody (who was an Executive Producer on the film) drove and the car, which was also to be used in filming the scene where the gang of girls together with Borgia Ginz arrive at Borgia’s country pad, purred along in the sunshine.

Our destination was that of Longleat where Jordan was filmed confronting a rhinoceros. One of the final scenes in the film is set within the great House which Borgia Ginz shares with the retired Hitler, who has moved there because “people here are much too dozy to notice me, and if they did, much too polite to say anything”.  Dorset was a great break and we stayed there to film the final scene which was filmed at Dancing Ledge – when Queen Elizabeth and John Dee walk along the cliff path into a darkening sky.

The really fun time happened after the filming of ‘Jubilee’ when all the footage was firmly in the can.  The premiere, at The Gate 2 Cinema, was extremely exciting although it opened to mixed reviews – some declaring it brilliant, others hating it.

We had such fun publicising it – driving down to the Cannes Film Festival in my old Renault car, (where ‘Jubilee’ was in competition in the Fringe Festival)  stopping off in Paris to see the Caravaggio painting of the Madonna in the Louvre – from which we were all asked to leave purely because of the way Jordan was dressed, my car breaking down just before we reached Cannes and being towed ignominiously into the city, being robbed as soon as we arrived in our hotel, strolling along the Croissette and driving to Antibes, we had such a great time  – but that’s another story.

Hear Jenny Runacre in a selection of Wireless Theatre plays.