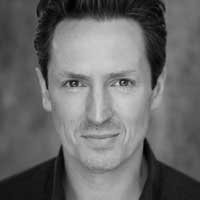 Matthew is a graduate of the Royal Academy of Dramatic Art. His first West End role on graduating was the part of Detective Sergeant Trotter in the 50th Anniversary of The Mousetrap where he performed in front of Her Majesty the Queen.

His many theatre credits include Claudius in Hamlet and the Knight in The Canterbury Tales both for REL productions, Lysander in A Midsummer Nights Dream, Lucentio in The Taming of the Shrew, Westmorland in Henry V and Paris in Romeo and Juliet all for the British Shakepeare Company. Tesman in Recording Hedda for the Ibsen stage Co

Then back to Agatha Christie playing Oliver Costello in Spiders Web and Thomas Clegg in Witness for the Prosecution both for the Agatha Christie Theatre Company and back to The Mousetrap to play Giles Ralston in Shanghai.

He also played Gilbert in the National tour of the award winning comedy The Sinking of the Titanic. His screen work includes Alain in the feature film Sink, postumus Leonatus in Sweet Swan of Avon and Albert DeSalvo the Boston Strangler in an ITV documentary and the award winning Devil Town His last national tour was playing Doctor Sparling in a revival of RC Sherriffs Home at Seven. He has also rejoined The Mousetrap for 2 tours of India.