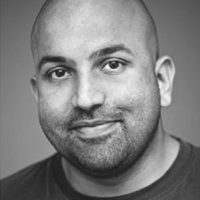 Naveed is a London based radio, TV and stage actor. His credits include the guest lead in Josh for BBC3, Martin in Bird’s Of A Feather and the Caretaker in Catherine Tate’s ‘Nan Specials’.

Stage credits include Slung Low,  Menalee in Pitcairn at The Globe Theatre (dir: Max Stafford Clark), Sanjay in Pioneer for Curious Directive and Sasrutha in The Truth Teller at The King’s Head.

Naveed has also been featured in several commercials, including The Carphone Warehouse and Voltswagen.