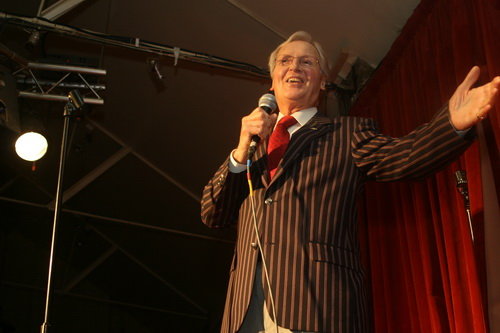 We were so very saddened to hear of the passing of our fantastic patron Nicholas Parsons.

When we first started back in 2007, we had no idea what we were doing – but we sure had loads of passion. We wrote actual letters to every single famous actor we could think of who had worked or still worked in audio drama, asking for money or support to get the company off its feet.

Many kind people replied, but none so generously as Nicholas Parsons – who suggested he might join us and help spread the audio drama love. What followed was an incredible level of support as our only official patron over many years.

He attended our launch party – making a speech, chatting with guests and even starring in one of the evenings sketches by In The Meantime, taking the mickey out of himself with excellent spirit! He recorded interviews with us and took cameo roles in several of our dramas – including The Springheel Saga and We Are Not The BBC.

He got us loads of tickets to recordings of Just A Minute, had us on his Edinburgh show to promote our production and even appeared on an ‘About Us’ promotional video we made – always making a point of wearing ‘Wireless Theatre red’ and telling people that he was proud to be our patron.

When we were a tiny company unsure of our future, or indeed the future of online audio drama, his kind support was invaluable and we genuinely believe helped to get us on the map.

What a complete legend he was. RIP Mr. Parsons.