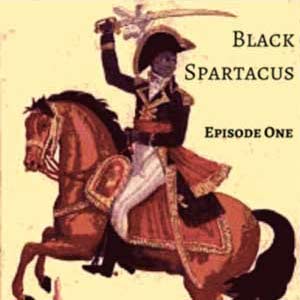 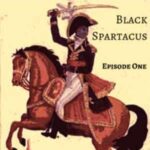 Black Spartacus from Thee Black Swan tells the story of Toussaint L’Ouverture, the most prominent leader of the Haitian Revolution. In episode one of Black Spartacus not everything is as it is appears on the seemingly tranquil Breda Plantation in the French Caribbean colony of St. Domingue (Haiti).

It is 1791 and strange rumours of liberty and the equality of all men have begun to reach the ears of the slaves toiling on the land courtesy of the bloody revolution convulsing the colonial motherland of France. Is it possible that the principles of liberty, brotherhood and equality could apply to a nation of brutalised black slaves? The white masters think not, but one man, Toussaint L’Ouverture, an ex-slave himself, has other ideas. Trusted by all factions in the colony, whites, blacks, and the increasingly powerful mixed race “Mulattoes” Toussaint sets about exploiting the divisions between the Royalist planters and the Revolutionaries from France to create an opening out of which true equality for the slaves may come.

Toussaint L’Ouverture and the Haitian Revolution

It has often been said that men do not make history but history makes men. What better example can there be than the story of Toussaint L’Ouverture. An illiterate ex-slave , without training, who had no choice but to find greatness as a leader to rescue his people from a dark chapter of history? In this he is assisted by the fearless meddling Voudou Priestess, Mambo Cecile, and by a young faithful house slave, Marie, poised to undergo an extraordinary transformation from a timid servant to a woman who for the first time dares to dream of freedom and beyond…