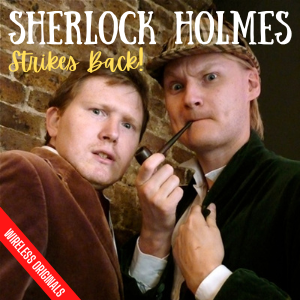 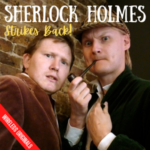 “The sound of hooves on cobbles…The choke of fog on the air…The taste of fear, more bitter than any almond…Who can save the British Empire of Great Britain in its hour of need? “

For one night only The Wireless Theatre Company resurrected the world’s greatest detective partnership of Sherlock Holmes and Dr John Watson for a live audio recording; Sherlock Holmes Strikes Back

Written and performed by Matthew Woodcock and Peter Davis, Sherlock Holmes Strikes Back! takes you on a funny, fast-paced adventure against some of England’s deadliest foes, with all the excitement of a live radio recording.

“My favourite! I laughed so much my cheeks hurt! Thank you to Peter Davis & Matthew Woodcock you are both BRILLIANT!”

ALSO AVAILABLE BY THESE WRITERS: THE TRIAL OF SHERLOCK HOLMES

Never thought for one moment that being a Holmes purist I would like this recording, but I had to buy it to find out; boy it is good….no excellent.It was funny, well wrote and we’ll acted leaving you at the end fully entertained, happy with the humour portrayed; and most importantly wanting more, can’t wait for more if they ever do them…then I’ll be first