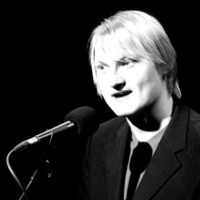 Peter Davis is an actor and writer who trained at Mountview Academy of Theatre Arts in London and has since appeared in several operas with the English National Opera (London Coliseum), including The Rhinegold, Nixon In China, Salome and Carmen.

Peter is also an avid movie fan, and co-hosts 2 movie podcasts – the Hellraiser Podcast and Horror Movie Maniacs. He wrote and directed a short film, Detached, back in 2009 and plans to make more when he can find the time and money.

Peter wrote or cowrote: Davis and McQuillan, Galaxicabs, Sherlock Holmes Strikes Back, The History of England, the Trial of Sherlock Holmes, and Time Travel Inc.

Listen to Peter in: DAVIS & MCQUILLAN, GALAXICABS, SHERLOCK HOLMES STRIKES BACK, THE TRIAL OF SHERLOCK HOLMES, PIG IN BOOTS, and his latest solo show THE HISTORY OF ENGLAND