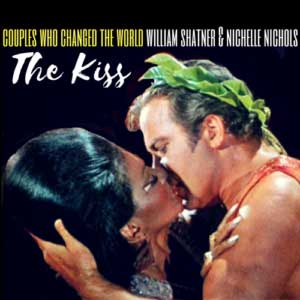 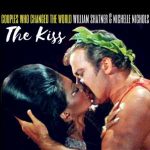 The Kiss is the story of the first interracial kiss on television, between Star Trek’s William Shatner and Nichelle Nichols. Captain Kirk and Lieutenant Uhura defy orders from studio executives and become the first inter-racial couple to kiss on an American TV series. Recorded live at The Pleasance King Dome (fluffs and all!) as part of the Wireless Theatre ‘Couples Who Changed The World’ season at Edinburgh Festival 2014.

The Kiss examines a point in history when racial tensions in America saw violence on the streets, and ultimately the assassination of Martin Luther King. Against this backdrop, Shatner and Nichols on screen kiss made a powerful statement.

“In a moment the wall between people of different skin colour began to crumble. Throughout the most powerful nation on the planet, people began to see what was important – just how much we fancy each other.

The Kiss – Couples Who Changed the World

Nichelle Nichols later said that after that kiss was broadcast, the worst reaction they got was a letter from a man in the South which said Southern viewer, which said:

“I am totally opposed to the mixing of the races. However, any time a red-blooded American boy like Captain Kirk gets a beautiful dame in his arms that looks like Uhura, he ain’t gonna fight it.”

The Kiss by Gareth Rubin

“So you have this radical act of people coming together, set against a backdrop of the assassination of Martin Luther King – a man who believed in peace and togetherness above all else. I thought it was an astonishing time and a fascinating subject for drama.” – Gareth Rubin

Feedback for The Kiss

Fascinating story well acted. You can definitely tell it’s recorded live as there are some mistakes and line crossovers, but that adds to the charm of the piece. Recommend.

Intriguing and captivating well told story about a historical entertainment and sociological event which changed television.