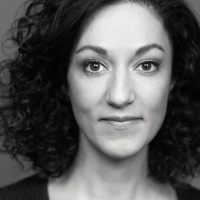 Nina Millns was included in Funny Women’s “Ones to Watch” 2016 list, Nina is an Actress, Writer, Presenter and Comedian from London. She founded the comedy collective Bad Handshake and was nominated for Best Sketch at the London SketchOff Festival 2015.

Nina Millns On Screen and Stage

Nina is an accomplished writer. She is a member of the Criterion New Writers programme and was shortlisted for the 2020 Sphinx30 program, a writers’ development programme for female playwrights. Her play DELETE was longlisted for the PapaTango Award, chosen for the RADA and Actor Awareness festivals and featured on BBC Radio 4. Nina’s recent commissions include writing the BBC Sounds series Mortem, and developing scripts for Big Finish Productions.

Read Nina’s blog about her Edinburgh experience here. Nina survived a gruelling course in clowning with the infamous Phillipe Gaulier and earned her red nose.

Listen to Nina in A GENTLEMAN OF MY OWN MAKING, THE KISS, ADAM AND EVE AND ERIC, HITLER VS FORD, APOCALYPSE SLOUGH and CARRIED.