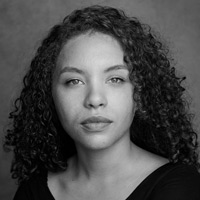 Saffron trained at RADA and was the winner of the Carlton Hobbs Award in 2018. She recently appeared in The Deceived for Channel 5/Virgin Media Television.

Other credits include ‘Small Axe – Lovers Rock’ for the BBC, directed by Steve McQueen, ‘Flack’ for Hat Trick Productions, ‘Strike: Lethal White’ Bronte/BBC/Cinemax and Emilia in ‘Emilia’ at The Globe: West End Transfer and The Voice in ‘A New And Better You’ at The Yard Theatre.

In audio, Saffron spent time on the BBC Radio Drama rep company where she played various roles. She played Cara in ‘All The Things We Never Said’ by Yasmin Rahman, directed by Lydia Thompson. She has also narrated ‘Viper’ by Bex Hogan, and ‘Becoming Dinah’ by Kit De Waal, both directed by Cherry Cookson, and ‘Orion Lost’ by Alastair Chisholm, ‘The Time of Green Magic’ by Hilary McKay and ‘The Trials of Koli’ by M.R. Carey