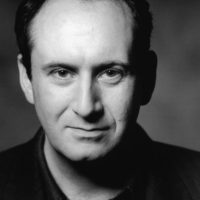 Stephen Critchlow is an English actor, notable for his work in the theatre and appearances on radio series such as Truly, Madly, Bletchley, The Way We Live Right Now and Spats, along with radio episodes of Torchwood (Lost Souls) and Doctor Who (The Nowhere Place).

He has also appeared in Kenneth Williams: Fantabulosa! as Kenneth Horne and the West End version of The 39 Steps. Most recently Stephen appeared in a hugely successful run of Men From The Ministry at The White Bear theatre.

A prolific radio actor, Stephen has acted in over 200 BBC Radio Drama productions during three spells with the BBC Radio Drama Company. He has worked in all areas of the medium – Book at Bedtime, readings, light entertainment, schools radio, Woman’s Hour, classic serials, radio plays, science fiction and Shakespeare. He played the part of Stephen in the long running BBC Radio Drama The Archers.