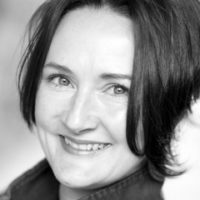 Ann completed a hugely successful tour of Shirley Valentine, which marked her return to the stage after a twelve-year break, during which she has been raising her two children, both of whom are now keen actors themselves.

Radio work includes continuity and promos for the BBC; news bulletins for BBC Radio 5 Live; and credits on numerous TV and radio commercials ranging from Laboratoire Garnier to Peugot.  She has turned her talents to the vocally diverse and demanding world of cartoons & animation and has completed a computer game pilot for Pearsons Education.

Past theatre work includes: Susan in Bed Among The Lentils; Adela in The House of Bernarda Alba; Rosie Probert in Under Milk Wood; Cynthia in The Real Inspector Hound; Anita in My Girl; Lady Capulet in Romeo & Juliet; Alice in John Paul George Ringo & Bert; Amy Lee in Laundry & Bourbon and Les in Bouncers.

Ann Theato possesses a passion and talent for writing and has written two novels and several film screenplays.  She wrote a four-part documentary series on the British Funeral Industry for Channel 5 and has been a writer for Newsrevue and www.badmothersclub.com.  She is columnist for Horse & Rider magazine.

For Wireless Theatre, Ann wrote A Very Grimm Christmas – The Maiden without Hands, Life At Death’s Door and Rat.

Listen to Ann in: Gino Ginelli Is Dead, Life At Death’s Door, Seasons