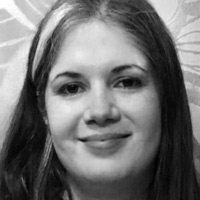 Elizabeth Parikh is a freelance writer of comedy and drama across TV, Audio and Radio. Originally from South Shields, Elizabeth was raised in Blackpool, Lancashire and later worked at the seaside resort as a Police Constable. She later moved into teaching religion and ethics and has taught across the UK including Cornwall and the Isle of Man.

Elizabeth’s first audio drama I HEART AMY was produced by The Wireless Theatre Company and tells the story of a young widow who is beginning to date again, but rather awkwardly finds the person she lusts after is her husband’s best friend from university. The script was inspired after Elizabeth followed an anonymous column in The Guardian newspaper authored by a young widower. The column chronicled his new life as a single father and described the surprising reactions of others towards his grief. He took readers on a journey of how it felt to begin dating again. Elizabeth was inspired by the columnist’s candour and his clear message that the media often skates over the realities of living with grief. When the first draft of Elizabeth’s script was finished she worked with the U.K. charity WAY (Widowed And Young) to talk about the language used in the script to ensure authenticity. Elizabeth was able to speak in depth with two young widows who shared their experiences and also discussed their views on the way in which the media portrays and handles themes of loss. They expressed the need in drama for greater honesty and prominence of characters navigating the grieving process.

Elizabeth Parikh’s second audio drama for Wireless was a four-part crime drama OMEGA. The story was inspired by Elizabeth’s previous policing career in the north. The story centres around Gifty who later in life finally begins her dream career with a northern police force and is tutored by Angela. Angela is a tough officer who has not forgiven herself for her mistakes which led to a high-profile criminal escaping justice. She invites probationer Gifty to join the investigation of her latest case, the murder of a university finance office. Angela is more determined than ever that the perpetrator must be brought to justice by any means including breaking the rules of professional police conduct. During their investigation events turn personal as Gifty and Angela realise they have become the targets of a far-reaching network that includes not only the university, but also a community fringe Church, the local media and their own constabulary.

A member of ITV Comedy 50:50, and member of the writers’ pool for BBC Scotland’s topical comedy Breaking The News, Elizabeth holds a life-long passion of writing comedy. She is very proud to have achieved BBC credits for comedy across TV and Radio. She has written for BBC Alba’s TV sketch show FUNC, Series 1&2, featuring a regular cast of comedy actors. Her sketches feature an enthusiastic but incompetent priest who is still learning on the job, and also, a sketch about what can go wrong when you try to return already worn clothes to a shop. She has also written for BBC Radio 4 sketch show Sketchtopia, Series 1&2, that takes a satirical look at modern Britain and Elizabeth has often featured British ways to save money, such as as the cost cutters guide to outdoor activities which requires you to leave your shame in the car park!

During the 2020 lockdown the monologue format took off and two of Elizabeth Parikh’s comedy monologues were produced and broadcast live on YouTube in association with Not Too Tame Theatre. The first monologue Stand By Your Woman was performed by Danny Kirrane (Don’t Forget The Driver, Game Of Thrones) and featured a besotted groom who has to film his wedding speech for his beloved Kelly as although Kelly has been released temporarily from prison to get married she is unable to attend the reception. The second monologue Careers Guidance was performed by Sue Devaney (Dinnerladies, Casualty, Coronation Street) and features a terrifying newsagent who is interviewing for the vacancy of a paper round and wants to impress on a bewildered youngster what a dangerous, lonely and frightening job it can be. Elizabeth’s work has also been performed by Not Too Tame Theatre at the Edinburgh Fringe Festival and Latitude Festival.

Writing for Radio, Theatre and TV

Elizabeth Parikh was part of a group of writers who wrote dramatic monologues inspired by the lyrics of a Christmas song. These pieces were produced by The Ink Festival and broadcast by BBC Radio Suffolk. Elizabeth’s monologue tells the story of a mother struggling at Christmas time, her daughter Gilly left years ago to complete a gap year but never returned. She remains hopeful that her daughter will return one day, and is still very close to Gilly in her absence, keeping up with her imagined personality, ambitions and tastes. Elizabeth’s inspiration for the script are the lyrics from the song ‘Have Yourself A Merry Little Christmas’.

The Hyde Park Picture House in Leeds screened Elizabeth Parikh’s first short film The Natural Room. The story is about an individual who has been born into a human breeding programme and is given the chance to see what life is like outside the compound. Elizabeth was inspired to write this script by the 1966 Sci-Fi novel Make Room! (which was later adapted into the 1973 dystopian film Soylent Green). The film script was commissioned by The Northern Film School and was produced by a group of students as part of their BA Filmmaking course. This led to a further four NFS short film script commissions.

In theatre Elizabeth’s short play Daughter’s New Bloke was performed (rehearsed reading) at Pleasance Theatre, Islington. In a northern household a daughter brings home her new man to meet her bickering parents. Against all odds they like him very much indeed but are slightly concerned he looks just like the photo fit of a local serial killer. They try to investigate their theories whilst endeavouring to remain polite and hospitable. Elizabeth has also co-written numerous comedies for theatre that have been performed at the Edinburgh Fringe Festival. In addition, Elizabeth Parikh worked for five years as a script reader, writing reports for The Library Theatre, Manchester.

Elizabeth Parikh has worked at BBC’s Holby City as a script researcher and has completed training in TV drama storylining with Lime Pictures’ Hollyoaks, and ITV’s Coronation Street. She holds a Masters in Scriptwriting for Television and Radio from the University of Salford, and has completed audio drama training through Theatre503. She was also selected to attend playwriting courses run by Papatango Theatre and Director’s Cut Theatre. In 2004 Elizabeth was selected to attend a 2-week programme of filmmaking workshops at the first Homotopia Film Festival, a Liverpool based event that champions LGBTQIA+ film, arts and social justice.