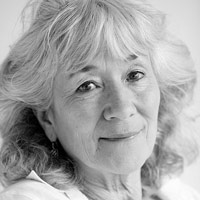 Illona Linthwaite trained at Rose Bruford and left at a time when repertory theatre was thriving. In the ’80’s and ’90’s she formed her own company Mica to promote women in the theatre as performers, writers, directors and designers. During this time she also wrote and performed THE SPIRIT OF APHRA BEHN and commissioned Adrian Mitchell to write ANNA ON ANNA – a play about the Edwardian poet Anna Wickham. With these two solo plays she travelled to Scotland, Japan, France, India and the US.

In London Illona has acted at the Arcola, Lyric Hammersmith, Donmar Warehouse, RSC, Playhouse Theatre, Southwark Playhouse, Young Vic, BAC and the Greenwich and National Theatres. Recent work has included companies like the Dot Collective, Bedouin Shakespeare, Punch Drunk and continued during the lockdown with the SLG Co, recording for their Greenham Common Website, for Arts Uplift a zoom rehearsal of a new play Suitcase Stories and for Swamp Motel, an online immersive detective game Plymouth Point.

Her most recent radio performance was in Delete by Nina Millns for Wireless Theatre in 2019.