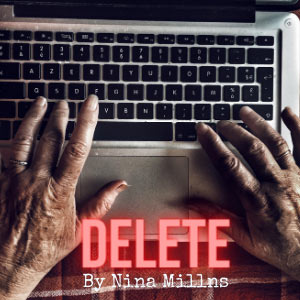 We’re hugely excited to announce that despite the minor inconvenience of a global pandemic, despite focusing lots of effort on improving our website over the summer, despite all the other stuff that 2020 has chucked our way, we have a new audio drama for our lovely listeners!

DELETE, written by the super talented Nina Millns, will be released on this very website and our shiny new Wireless Theatre Audio Drama podcast channel on the 24th of September.

“Sue is dating. Mostly men with beards. Sue is Tanya’s parole officer. Tanya needs to stay clean. Tanya needs to serve her community sentence by teaching Patricia how to use the internet. Patricia wants to change the world, but it’s not the 60s anymore and the rules are different online.”

Directed by Robert Valentine and featuring the vocal talents of Balvinder Sopal, Saffron Coomber and Illona Linthwaite, DELETE is a funny, poignant and ultimately shocking play about an unlikely friendship between three women in a world saturated in online abuse, sexual violence and addiction.

DELETE was longlisted for the PapaTango Award, chosen for the RADA and Actor Awareness festivals and featured on BBC Radio 4. Nina’s recent commissions include writing the BBC Sounds series Mortem, and developing scripts for Big Finish Productions.