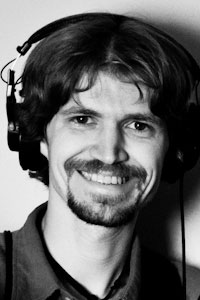 Indie audio drama veteran Fred Greenhalgh started his creative audio journey in 2007, the same year that Wireless Theatre formed. We caught up with Fred to learn more about his experiences of the indie audio drama revolution, and his online audio drama workshops.

How did you get involved in audio drama?

I started back in 2007 (the same year that Wireless started, as I recall!) – back then, I was a recent university graduate, with a focus in film, but had ambitions for bigger, longform stories that would be difficult to produce on a student filmmaker’s budget. A friend introduced me to old time radio dramas in America, and I fell in love with the medium. “Why aren’t more people doing this?!” I asked myself – and I set out to do it.

What got you hooked?

The medium is so deliciously simple conceptually yet the art of how you tell a good story with sound is never ending… I keep learning new things constantly and trying out new ways of producing work and telling a story. Early on, one of my favourite revelations was really getting into the process of active listening… Going out into the world with a portable sound recorder and capturing sounds of everyday objects. Forests, trains, automobiles, cities, etc. and then entering the non-literal, e.g. a weird piece of metal that goes ‘twang’ in a particular way. The fantastic thing about sound is how a particular effect (say the sound of sizzling bacon) can instantly transport you in your mind to a particular time and place.

The Indie audio drama scene has exploded over the last 10 years. What changes have you been most aware of?

I am really excited about how the indie space now has its own critical mass – we’re now in at least our third wave of creators entering into the medium, and as podcasting has matured, the approaches to storytelling have gotten more sophisticated and ask more of the listener. I love how indie audio drama is a youthful, inclusive, and artistically ambitious scene.

What are you most excited about in audio drama right now?

Frankly, with larger audiences and enthusiasm around audio drama, it means more opportunities to make really great work. Culturally we’ve barely scraped the surface of what’s possible. While I try not to let high-tech effects get in the way of good storytelling, I’m intrigued about the possibilities techniques like binaural audio and Dolby Atmos offer to audio drama. I expect that as apps improve we’ll start to see more satisfying experiences for non-linear audio narratives, which could be a tremendously fun place to explore. Mostly I’m just loving that (especially, it seems, in the era of the pandemic) the larger entertainment industry has finally noticed that fiction podcasting is a thing, and jumped in with both feet.

What advice would you give to someone who wanted to make their own audio drama? What are the essentials? Where should they start?

My biggest advice is just to go out and do it. You learn so much making your first project, and you’ll make mistakes which are the only way to learn what to do differently the second and third time around. At the end of the process, even if certain things don’t go smoothly, you’ll have made something – which is an accomplishment very few get to achieve. (And, shameless plug, I have a free 5-part online video series for audio drama beginners)

Where do you get your inspiration from?

I love the indie audio drama community, it’s an incredibly supportive place where, by and large, creators support each other and are extremely generous with knowledge, resources, and connections. Outside of enjoying other art, I spend a lot of time in the natural world and remembering that we’re only on this spinning ball of dust for a fraction of an instant and so we have both the freedom and responsibility to make the most of our experience here. With my stories I try to say something about the experience of being human… even if it’s by using supernatural tropes like ghosts, demons, and evil books as metaphor for larger issues, like why do humans have such a hard time treating each other nicely?

What is your favourite podcast or audio drama at the moment?

Two of my favourite artists are Lauren Shippen and John Dryden, and to see them collaborate on Passenger List was a true powerhouse combo! The second season is out now and I’m really excited to dig in.

In podcast-land my series The Dark Tome has two seasoned out for free, and the full epic saga of The Cleansed is also available in its entirety. On Audible look for Locke & Key (13.5 hour unabridged audio drama based on the Joe Hill graphic novel – produced before the Netflix series came out) as well as The X-Files: Cold Cases. Currently, I’m working on an adaptation of the beloved graphic novel series ElfQuest.

Image of Fred with Stephen King and William Dufris © Audra Hatch 2021. All other images © Fred Greenhalgh 2021. Images reproduced with permission of Fred Greenhalgh.