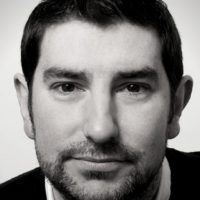 Jack has been a professional actor since 2000. He began with regional touring productions, focused initially on theatre work before moving into audio. As such, he has lent his voice to numerous Wireless Theatre productions since 2007.

Notable audio credits include all three series of The Springheel Saga, Dead London, The Curse of The Wolfman and Guards! Guards!

Jack is an accomplished producer and director.

Listen to Jack in The Springheel Saga, Gullibility Factor, Frozen and The Importance of Shoes.