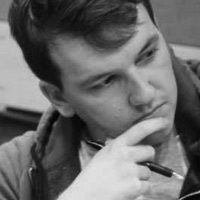 Oliver Cookson grew up in North London, Kentish Town, son of Director/Producer Cherry Cookson. As a teenager he often enjoyed writing short fiction and began to take a more serious interest in scripted work when he attended his film class at La Swap.

He went on to study Creative Writing and Film at The University of Roehampton, where his interest in scripted drama began to grow. He graduated in 2013 with a 2:1 and a newly found passion and desire to begin a career as a writer.

The Chief is Oliver Cookson’s first foray into published work. It tells the story of Oscar, The Chief Mauser of Number 10 Downing Street. The Chief Mauser being a posh way of describing what is essentially the pet cat, nonetheless Oscar is always present for all the ins and outs of one of the most famous houses in the world, and on this occasion one of the biggest days in politics, the handing over of power!