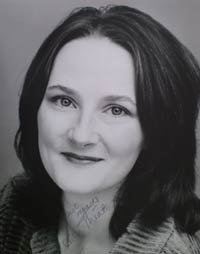 I’m up for sale on eBay.  Well, that is to say… I was. I’ve now been sold for three pounds ninety five. Plus postage.

I’ve just Googled myself.  Well, I’ve got a lot of time on my hands and no, they haven’t turned hairy (unlike the lady I once read about in Woman’s Own who had the misfortune to grow pubic hair on the base of her thumb.  It’s true.  A horrendous potato-boiling accident resulted in the immediate need for a skin graft taken from her inner thigh by an over enthusiastic plastic surgeon.).   But I digress.

As we are all now a nation of spies, I like to indulge occasionally in self-incriminatory clandestine espionage – I look myself up on the Internet.  Just for fun you understand.  Just to see what people might find out should they decide to look me up on the Internet.   And lo and behold, what did I find last night?  – A signed headshot of myself up for sale.

Two months ago, I was contacted out of the blue by a chap who said he was an Eastenders fan and that he wanted a signed photograph.  I had a fan?!  Donkey’s years ago, before the dawn of the universe and the invention of barcodes, I played DI Peckley in 2 episodes.  A teeny cameo role that no-one could possibly remember.  I have a vague recollection of being filmed talking to my fellow officer in a car outside the café and then running inside and arresting somebody for a drugs offence.  And that. Was. It.

I rarely send out headshots of myself these days because everything is digital but I dug out a very old photo, signed it and sent it off.  As Alan Ladd once said, “I think any Hollywood movie star who refuses autographs has a hell of a nerve.”

Okay, so I’m Cricklewood rather than Hollywood but the sentiment is the same.   It cost me a couple of quid in postage, money possibly put to better use by paying off a bit of my £23 quid library fine or buying some toothpaste but hey….. I’m an actress.  I’m resilient.   That week I used my daughter’s card and salt on my choppers.

I progressed with my life and thought no more about it.  Actually, I occasionally glowed a little inwardly; a warm glow; an ‘Oasty-Toasty-Cottage-On-The-Coasty’ glow of the ego; an ego which whispered, “Hey, life is not so bad… forget the fact that a crack addict lives in your bin area… forget that you are so poor you share shoes with your son… forget these heart-hardening days of hammering fruitlessly on the firmly closed titanium door of opportunity with your Play-Doh fists of hope.  You my friend, once upon a time, were in Eastenders… you my friend… have a fan.”

And then – he sold me.  If you don’t believe me – here’s the link.  You might have to cut and paste it into your browser bar but it’s worth it – take a look for yourselves. (link no longer available).  See – its true I tell you!

He was no fan.  Sob!  He was a ruthless eBay autograph Seller, craftier than a fox, quieter than a naked ninja, stealthier than a Nighthawk.  It would be pointless playing Grandmother’s Footsteps with him, put it that way.

Not content with deceptively obtaining my photograph, the Seller has added a somewhat embellished list of my acting accomplishments, including three separate appearances in Coronation Street.  I wish!  I’ve never even been to Manchester.  The nearest I’ve got to the Corrie cast is being photographed with Bill Tarmey at an album signing in HMV Oxford Street (**it was for my friend’s mum, okay?!).

Caveat Emptor, as they say in Latin – in other words ‘let the buyer beware.’  (Thanks to my teenage son, I speak one other Latin phrase – Sexus Erectus Pinus.  That’s six tall pine trees, I’ll have you know).  I mean, I could have sold my own photograph on eBay and made a few quid for coffee and buns for me and the crack addict.  Ah well, on top of trading my photo, the Seller can now boast that he was blogged about afterwards for his audacity, and that can be his claim to fame.  He’ll never beat mine.  I once met the Honey Monster at Fiveways, Colchester.

I shall continue to Google myself and I thoroughly recommend you all Google yourselves on a regular basis.  Just make sure you avoid boiling Roosters at the same time and you’ll never have to shave your thumbs.