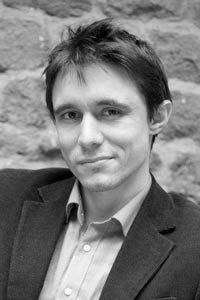 Richard Brooks knows a thing or two about writing for audio drama. His script for ‘A Haunting Beyond the Lake’ recently took first place at the UK International Radio Drama Festival ALCS Audience Awards. Wireless caught up with Richard to find out more about his passion for audio drama and his top tips for would-be script writers.

How did you get involved in writing for audio drama?

Audio drama has always been one of my passions. I remember listening to the BBC Radio Lord of the Rings and Hitch Hiker’s Guide to the Galaxy on tapes with faded, scrawled writing as a child in the 80s and 90s. For birthdays, I’d asked for voice recorders, microphones and a synthesiser deck. It was a huge thing and I had no idea what to do with it. Since my late 20s I started paying attention to the new emerging scene of digital audio drama, writing academic articles on the potential it offered for creative entrepreneurship. Always a fiction writer, I turned my short stories into scripts and made them into plays – it was surprisingly easy.

What got you hooked?

It was really the wonderful 11th Hour Audio Drama Competition run by Matthew Bourdeau that really galvanised me back into audio production. I am terrible for overthinking story writing, but this competition demanded people put aside perfectionism and just act. I’ll forever be grateful for Karim Kronfli for picking my script for the UK team submission and remember well, being electrified at hearing Beth Eyre read the lines of my main character Agnes in and adventure called Ivory Towers.

The Indie audio drama scene has exploded over the last 10 years. What changes have you been most aware of?

Digitalisation has dramatically lowed the bar for starting out in production, made collaboration over great distances possible and democratised distribution. Added to this is the growth of social media, it’s close links to the new media scene and crowd-funding financing models. These are huge positives for creativity but it’s not all good. The podcast ‘buzz-economy’ for audio fiction is difficult to sustain for more than a few well-known titles and often becomes dominated by long sci-fi or horror serials. I sense that we are likely to be at a new point of change, as podcast audiences themselves are maturing and are willing to pay for what they want. Finding a way of making this sustainable, and enabling indie producers to enjoy professional careers will be the challenge.

What are you most excited about in audio drama right now?

There is lots of space for innovation in the industry, AI powered chose your own stories supported by smart-speakers or geo-location offers exciting vistas for ambitious producers. Still, there is no beating a good story well-told and it’s great seeing how companies who championed audio drama at its start in the digital era (e.g. Wireless Theatre Company, Wayland Production, Dagaz Media) are busy behind the scenes producing high-quality podcasts serials, dramas for BBC Radio 4, epics on Audible and hosting emerging playwrights on their platforms. Equally I love seeing how experienced playwrights like Marty Ross and Robert Valentine who started off on Wireless Theatre Company are now in hot demand across several titles – it shows that there is room for progression and professionalisation in the audio business and as a listener I think we all benefit from seeing investment in talent.

What advice would you give to someone who wanted to make their own audio drama? What are the essentials? Where should they start?

You CAN record something by yourself in your own bedroom with a smartphone, some audio editing apps (and understanding neighbours). By why do that? Audio drama is really about collaboration. Get involved in the Audio Drama Hub on Facebook, listen to podcasts like the Audio Drama Production Podcast, Adwit and Madiva, sign up to the newsletter from the Podcast Host, get into the 11th Hour Audio Drama challenge in October. People are extremely friendly and for the most part it’s like amateur/community theatre where you put in your time free, for the love of it. But if you’re ambitious or want to get your story told those contacts are priceless.

Where do you get your inspiration from?

I love the intimacy of audio and it’s ability to surprise. Too often it can be seen as the poor man’s TV, when in fact it is more like music, like a good book that whispers into your ear, or a friend that takes you by the hand on an adventure. I think one of the reasons why audio is often so good for horror despite having no visuals is its ability to ability to paint a ghostly world around a person. I love the stories that really use this intimacy like when in BBC Radio 4’s Home Front, Dorothea Winwood grieves for her lost child and the decisions that have led to this point, or the way Nigel Kneale completely flips the listener’s understanding of what is happening in The Road.

What is your favourite podcast or audio drama at the moment?

Currently I’m enjoying listening to spy dramas – The Complete Smiley series is an absolute stonker, with The Spy That Came in From the Cold being a particular gem. Keeping The Wolf Out is a sleazy, scary insight into Communist Hungary, which appeals as a world you don’t normally experience. What I like about these series is that they are very tight and self-contained. You don’t feel like they are treading water or building up to something that might be resolved in series 4.

A Haunting Beyond the Lake is my most recent production. A love story and a ghost story, it’s something I’ve wanted to write for a very long time but never found quite the right way of telling it. Winning the UK International Radio Drama Audience Award for the play felt like a wonderful way of recognising the huge passion of the very talented team that made it and the real-life story that inspired it. Also coming out on the 30th of October for 11th Hour Audio is ‘Gower Hall’, a comedy-horror that combines 1930’s farce with West Country folklore in what should be a fun and anarchic production.

1 thought on “Writing for Audio Drama”