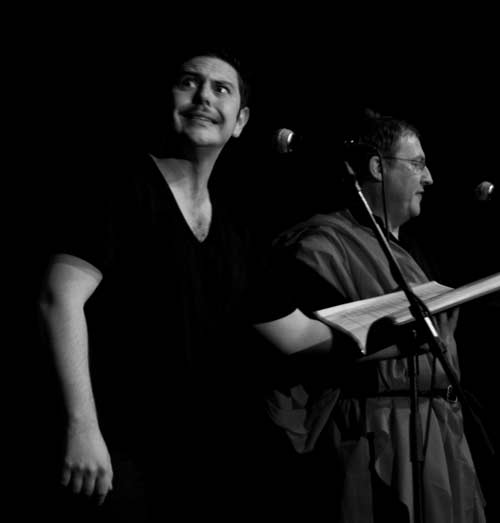 JOKES!  That is the concept of what a lot of people think the life of a jobbing actor is but actually whether you are employed or not, being an actor is an incredibly varied experience.  You meet loads and loads of cool people – if you fancy your chances as a turn, this industry really throws up some of life’s greats (and to be fair some of the biggest wankers but you can’t have everything, and anyway meeting an utter twat makes you a) feel better about yourself and b) is good because as an actor you can STUDY them and work out why they are such a cretin!) and though it can be stomach charmingly uncertain, you never know what you may be doing next and that is all rather exciting.

To Learn, Or Not To Learn?

Today I woke up at 9.  Went for a 45 minute jog and then came back to attempt to learn two whopping great big scenes from ‘A Comedy of Errors’ which I have an audition for on Friday.  Now, I know nothing about this play except that it is a Shakespeare ‘comedy’.  Reading it hasn’t worked, I still didn’t understand it so I watched the BBC version on YouTube from 1983.  The sets look like they were made by kids in a play-school and there is some really dreadful acting in it, but what amazes me is that the part I am up for is played by Roger Daltrey!!!!  The sex god from The Who!  Doing a turn at old Shakers!!!  Mental.  I finish the film and actually it has helped.  Now back to the learning.

Learning lines is essential if you want to do some performing.  There is no way out of it.  They have to be learnt but it is hard!  Nothing sticks and that is happening today.  I realise as well that I have a stand-up gig later and have very little material so should cobble some stuff for that.  I tried stand-up about 4 years ago and though it is utterly terrifying I like it enough to have a go when asked.  It is another string to the bow and really it boils down to the fact that once you’ve tried stand up then nothing is scary EVER again.  So I spend the next 2 hours lying on my bed thinking about little funny things, pace up and down performing them to the bedroom wall and just generally become less inclined to learn the lines of a play written between 1592 and 1594.  Also, with this audition I have to play a song on my guitar, so that’ll need practising.  I pick the guitar up and practise a song that I have known how to play for two years for about an hour and a half…anything to not learn those lines.

So by 5 that there is no point anymore.  The gig is looming and I have to hike it over to Streatham for it so the lines will have to be learnt tomorrow.  The audition is Friday so it will be fine.  I’ll spend all day doing it.  Oh no, hang on , I can’t.  I’m at work all day.  I have a job!  Of course I do!  I need something to pay for all that Stella Artois. I’ve got five back to back tours tomorrow on London Duck Tours my employers at the moment.  London’s ‘Amazing Amphibious Adventure’!  Using the skills I have as an actor and stand up I can make my tour quirky, informative and fun.  On paper.  After two years at it sometimes that is impossible as was proved on Sunday when a woman (that looked a bit like Nanny from Count Duckula) came in to the office to complain that the tour guide she just had was a right ‘moody bastard’.  I was bored, it was tour 5.  I couldn’t look happy.  I’m not THAT good an actor.  However, generally, I’m lucky with my day job.  It pays well and the most important factor is that it is flexible, allowing me to dart off to auditions willy nilly…none of this is going to get those lines learnt though…

I go to my gig and it is really nice.  Audience large and friendly, some great acts on and also some really dire ones!  But that is par for the course.  It over runs so I’m still there at 11.  I have a pint with the comics after so now its 12 and a night bus back so get in at 12.40.  To late for any lines.  I’ll do it tomorrow.  After my 5 tours.