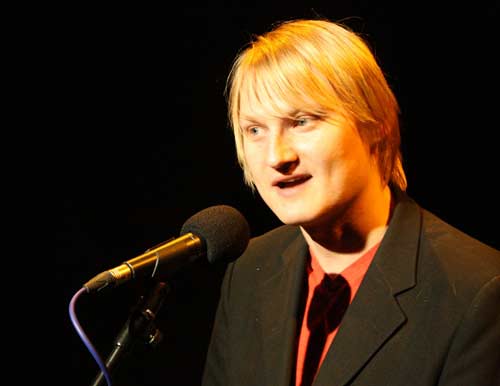 Right. So I was asked if I wanted to write a blog for the Wireless Theatre Company. I did, so I said yes. And here we are.

Hi. My name is Peter Davis. I am a writer/director/performer and have been involved with The Wireless Theatre Company in a few productions. I thought I’d write a little bit about writing. As I’m a writer, and writing is what I do, I thought that writing was a good thing to write about. In fact, you can’t see this but I’m actually writing right now. Well … I was but then I stopped to think about whether that last line was funny or not. Then I wrote that. Then went back and put the “was” in italics so it scanned better.

When Mariele first started the company I said to her, “Right. I’m going to write you a radio play.”And I started writing one. That eventually took me two years to finish!

It was a sci-fi comedy called “Galaxicabs”, set onboard an inter-stellar taxi. I started it, then it just got stuck. I had an opening I was happy with, and had a detailed idea for the rest of the story, but just couldn’t seem to get it on paper. Or screen. Every time I opened up Word and looked at the script it felt like I was wading through treacle. I’d procrastinate, panic, then quickly quit Word and watch Star Wars instead. Eventually (and I cannot for the life of me remember how or why) I just snapped, and finished the whole thing in about four or five hours one evening. I looked back on it, and was pleased.

All my plays for Wireless have been comedies. My two favourite genres are comedy and horror, so these are naturally the ones I am drawn to as a writer, and the Wireless Theatre Company has been a wonderful platform for my comedy output. My answer to the question, “Why are you telling this story?” is, “To make people laugh.” People will always need cheering up, and I know how comedies always make me feel better, so I want to share that with as many people as I can. Don’t get me wrong, I’m not completely altruistic – I do want to eventually make lots of money for doing this – but that’s not my starting point. I want to cheer people up. That should be my job title – “Cheer Creator”. I just want to make people happy. And for them to tell me I’m amazing.

The hardest thing for a writer is deciding why he wants to tell a specific story. You’re going to put all this effort into a story, a structure, characters and dialogue, so you need to make sure you’re doing it for the right reasons. If you’re telling a piece of drama, what is it about that particular story that makes you want to share it with other people? And how are you going to do that in an entertaining way that they will care about? Sometimes the answer to “Why?” is, “To make a lot of money.” These are the scripts that ultimately fail. They try too hard to please the potential audience and end up being empty. If you don’t care about your story, nobody else will.

I’m going now. In fact I have recently started writing “Galaxicabs – Part 2”, so I suppose I’d better get back to that really. If it’s anything like the last one it should be on the website by Summer 2013!