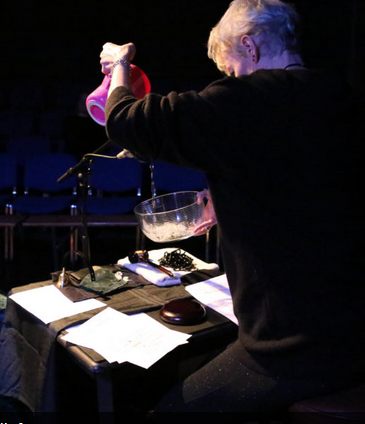 When did you begin your career as a Foley Artist? How did you get started?

Just a note about the name ‘Foley’.  In radio drama, the sound effects person is in fact called the ‘Spot SM’ meaning ‘Spot Studio Manager’.  Why ‘Spot’?  Because you are on the spot in the studio with the actors.  Foley is the term for people doing sound effects for film and TV.  Radio and film/tv sound effects teams work in very different ways. I became a BBC Radio Studio Manager in 1983 and knew I wanted to be in the specialist group of Studio Managers, called Group 4, Light Entertainment and Radio Drama.  I became a full-time Group 4 Studio Manager in 1996, mainly doing the Spot FX, or Spot SM (Spot Studio Manager) as it is called, ie the sound effects.  The role of the Spot is being a kind of floor manager;  looking after the actors, liaising between the actors and the ‘box’ where the producer, PA, writers and my studio manager colleagues are, whilst being aware of where we are in the script, getting the actors from the green room in time; also setting up the studio for different scenes with my studio manager colleagues and of course getting all the sound effects out of the sound effects cupboard at the beginning of the day and knowing what will be used when.  It’s a busy multi-tasking role.

What do you enjoy most about your work?

What unusual challenges have you faced in creating the right sound, and how did you solve them?

Pretty much every sound required is a challenge to some degree or other. One unusual example was a drama about a very small band which included a trombone player.   The actors in this radio drama didn’t have to actually play any instruments but had to be heard playing them, if that makes sense, like actually holding a tambourine, or holding a drum.   I couldn’t get my hands on a trombone, so I substituted the ‘noise’ of holding a trombone with a music stand, which is the same kind of sliding up and down noise, if that makes sense.  It worked wonderfully well!

What is the most interesting project you’ve worked on so far?

All projects are so utterly interesting, I can’t possible pick one out.  An unusual project was the last project I did, just before the pandemic hit, was making the sound effects for a theatre play for the deaf & hard of hearing which was fascinating.

Tell us about your most unusual sound effect discoveries or substitutions

I’ve also used the contents of fruit salad for sex scenes, which is very amusing.  I will leave that to your imagination …

One tip when using fruit salad.  Always have a tin opener on your person just in case!

What do you consider to be the high points of your career so far?

I did the sound effects with Richard Briers for a Radio 4 drama about Tony Handcock’s suicide, “Hancock’s Last Half Hour”, produced by Ned Chaillet.  It was a whole day of Richard and myself in the studio.  After the play was broadcast, Ned told me that Richard Briers had called him to say ‘you wouldn’t know, listening to that, that there were 2 of us on set’.  Meaning, he couldn’t hear me or the presence of me at all.  Hi-Five Richard!

Another highlight was a few years ago I did the sound effects for a comedy for three nights at the Victoria Theatre.  Unbeknownst to me, Terry Gilliam (Monty Python) was in the audience.  After the performance, he came up to me and complimented me by saying what a great sound effects performer I am.  Couldn’t get any more praise in my book than that!

I have never made it into film or television sound effects, which is a dream of mine.  It is a different medium as far as sound effects goes, and I know I’d make a great film and tv foley artist.  My footsteps are second to none!

Have you worked in a range of mediums? which is your favourite?

Radio drama and light entertainment/comedy are like being at home for me.   Radio will always be my favourite. Radio dramas are made in scene takes called ‘rehearse/record’; i.e. rehearse a scene and then take 1, take 2 etc.   This is great for really honing the timing of your sound with the actor(s).  After the final take, you then set up, sometimes actually building the next set for the next scene with your colleague and then you produce your sound effects for that scene.

Then there are stage projects, Wireless Theatre for example, which, again, have their own unique challenges because unlike radio you are on show and ‘are seen’ by an audience.  On stage, although you rehearse the whole thing through, you still only have one crack at it, all in one go, live in front of the audience.  Because of that you have to have all your effects lined up as best you can.  However, with the stage performances, you have your instant feedback and of course the applause at the end.  Joyous!

Are there any unique challenges in sound effects for audio dramas?

Having the ability to think outside the box.  Very frequently the sound of the ‘thing’ you need a sound effect for can’t be done.  So you have to think of other ‘things’ that can be used to make the same effect.  For example, in a stage play, they required marching feet to be done simultaneously with the actors on stage.  Recorded marching feet would not have worked at all.  So, here’s a secret.  Get some blind-baking beans and a small carboard box that can be sealed.  Put the beans in the box, seal the box and ta-daaaa, a whole platoon of soldiers in a small box! Here’s a ‘thinking outside the box’ question.  You quickly need the sound of a puppy dog running across a wooden floor.  How would you make that effect?!

Are you involved in any exciting projects you would like to talk about?

Well, sadly no drama or comedy projects, due to the pandemic.  However, an interesting job I do, one which nobody really knows about.  Is it foley?  Not really, you make your own mind up.

For the past 26 consecutive years, I have been part of the Brit Awards TV sound crew.  Doing what?  I am ‘The Applause’.  Yes.  The Brit Awards Applause person, that’s me.

In other words, I have, since 1994, played audience cheers and applause from a sampler, front of house, in the auditorium of various venues, including the Earls Court stadium, Alexander Palace and in the past few years, the 02.

I thought I had finally done my last clap last year (2020) but to my delight the team are together again for this years Brit Awards on May 11th 2021, and I will be there with my keyboard, cheering and clapping all and sundry.

Oh and it may be of interest I am also a fraud investigator and I find really bad people.  Make of that what you will!

If you are in need of an expert in audio sound effects for your audio project, Jess can be contacted on 07976 163917