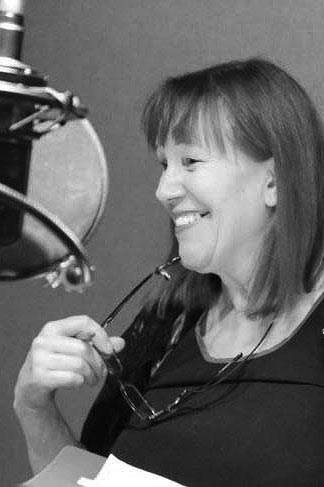 Cherry Cookson is a vastly experienced award winning audio director and producer who has directed many of Wireless Theatre’s best loved productions. A pioneer of live audio productions, we caught up with Cherry to learn more about the pitfalls and benefits of leaving the studio…

What was your earliest experience of directing or producing a scripted audio drama on location?

The first play I recorded on location was WISE BLOOD by Leigh Jackson which I recorded in and around Kentish Town in about 1986. It starred Geraldine James, Bill Nighy [not so well known then!] and Maureen O’Brien. It was a contemporary thriller about someone whose sister has disappeared.

What inspired you to move out of the studio?

Radio studios sap one’s energy and successful radio acting requires a great deal of energy. It is really hard to imagine one’s surroundings when you are in an airless or heavily air-conditioned box with sound panels on the walls. The difference location recording makes to performances is huge. Not only can you get fresh air in the lungs, you also have a wide range of visual stimulus to help achieve a truthful performance. I first did a location recording in the 1980’s and since then have always tried to do a mixture of studio and location. Often you can do both within the same play, i.e. one day in each, and this can always be useful as you can move scenes which didn’t work on location into the studio.

What challenges have you faced on location as a director or producer? How did you overcome them?

When recording outdoors, the weather can be a big problem. Wind is the worst thing but now digital devices mean we no longer have to use paper scripts. Wind can still make for problems with the microphones.

Background noise is also a big problem especially when recording a period piece. It is really important to do your research regarding the area where you are planning to record your play. You don’t want to find that someone has some huge building work starting on the day you begin. Even sounds like a strimmer or electric saw can cause real difficulties as you can only ask them to stop for a short period of time. If recording at my home I always send my neighbours a note a week before so they know if possible to avoid the days I am doing a play here. Things like the reversing noise that lorries make can ruin a take. You need to work out a really well organised schedule and make sure things like lunch plans are catered for, where people can use a toilet, or leave their things safely. Actors can sometimes become rather child like on location and it can seem like a school trip! So make sure they are fully briefed on everything before you start.

What are the benefits of recording on location?

Location recording is quite wonderful in terms of getting different and fresh performances out of actors so they don’t sound like they are reading from the script.
They sound more spontaneous, they react to their surroundings and they don’t get nearly as tired as in a studio. It is particularly good to do stage plays on location, as in the studio the often very long scenes can wear everyone out and as said before, energy is absolutely key to good radio acting. Being able to see real things, whether in a house or outdoors, is just wonderful and you will often see actors really taking in their surroundings while acting from their script. The rhythm of their lines and interaction with each other will be quite different to how they would sound in a studio.

What advice would you give directors who are about to attempt recording on location?

Make sure the play is suitable to record on location as not all of them are.
Always have a very well organised schedule, do non-consecutive scenes together when set in the same location and warn the actors about this – send them a schedule in advance even if it is only a plan so you don’t need to ask them to do a tricky scene out of the blue after the read. Warn them about quiet clothes, to bring minimal stuff, let them know catering arrangements as it is surprising how important this is to them. Once on location in the countryside, we overran at lunchtime and an actor stormed off when he discovered the pub and the cafes had closed. Also, it’s quite difficult to do comedy on location so think twice about it. You need to always have a contingency plan with outdoor scenes in case of unexpected noise problems. If using your own house perhaps have another one on standby in case there are unexpected disruptions in yours. Have everything you need in a bum bag, pens, phone, house keys etc….

What is your favourite memory of directing or producing a live audio drama?

A number of years ago I directed A DOLL’S HOUSE on location with Janet McTeer and Ciaran Hinds. As I gave Janet the role, I told her she would never play it on stage because she was too tall! How wrong I was! After she had triumphed in the role in the West End and New York, leading to a very successful film career in the States, she took me out to lunch to say thank you. In the huge dramatic almost final act there is a moment when Nora is desperately fearing the arrival of a letter which will ruin her. Recording this in a real house, with a real letterbox near the mic, was completely breath-taking because of the real anticipation. Both actors performed quite brilliantly and were in tears during the recording of this hugely moving scene. We were all mesmerised by their acting and this was a first take. Always, always record the first rehearsal as it is sometimes the best.

Another favourite memory is of working on location with the wonderful and sadly missed Helen McCrory recording THERESE RAQUIN – she was so good you could have broadcast the readthrough. It was hilarious when doing the big love scenes, near an open window, at school out time. The passing children must have wondered what all the heavy breathing was about!

My worst on-location moment was charging in to complain to the actors (who I couldn’t see) for corpsing when time was tight, only to discover that the family Labrador in the country house where we were recording had peed into my handbag!

What are you working on right now?

I have some audiobook projects in the pipeline.

Should you be looking for an award-winning audio director or producer for your next audio project, Cherry Cookson can be reached through Wireless Theatre at website@wirelesstheatre.co.uk

Listen to plays directed by Cherry

2 thoughts on “Cherry Cookson on Directing on Location”