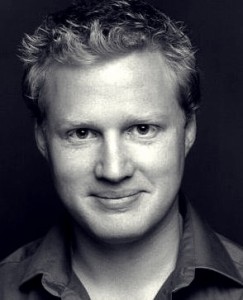 David Beck is the directing talent behind a huge number of popular Wireless Theatre productions. We caught up with David to ask about the challenges of directing epic multi cast audio dramas, including The Hound of the Baskervilles, and The Christmas Pig. (Those are two separate titles, by the way. Combining them would be carnage.)

I trained as an actor originally, and became involved with Wireless (and therefore audio drama!) right from the beginning; acting in small studio productions as well as a lot of the live shows.  As I began to realise that I wasn’t cut out to persevere with the acting life, I began to direct some bits and pieces whilst Wireless was still operating on a relatively small scale.  I had a fair amount of experience in the medium by that point, and I guess it’s fair to say that it’s a pretty niche format?  So it’s tricky to find people who really know how to go about producing and directing good audio drama.  I gained some valuable and varied experience as a director and I sensed that actors enjoyed working with me; I also definitely felt that my acting experience helped and informed my approach as a director.  Then, as Wireless got bigger and started producing work for Audible, I sort of went with it; developing our methods of making work over the years.

You’re a man of many talents; acting, directing and producing. Which role do you prefer?

The love for acting began to leave me as soon as I got torn apart by a particularly mean teacher in my second year of drama school; there are a few other boring and self reflective reasons that I couldn’t stick at it but I won’t go into them!
The director/producer role suits my skill set quite nicely.  Obviously I enjoy the creative aspect but I’m quite a thorough (and neurotic!) planner, which is really important with these big and complex productions.  I don’t mind the slightly lonely position that comes with being in charge, and I like to think that actors enjoy the experience of coming in to work with me…having fun (and telling people that you’ve had fun), is really important to me.  I think people give their best work when they’re having a good time.

You are known for directing lengthy productions with large numbers of actors. What are the biggest challenges with this type of production? How do you overcome them?

Just that, the sheer size of the job!  It takes a lot of patience I think!
Also, the complexities of planning the recording.  Coming from an acting background, I try to preserve the acting experience as much as possible.  Keeping actors recording with the right other actors so that you get the best possible result in terms of performances.  Unfortunately this isn’t always possible; as actors availability etc starts to come into play, your neat and tidy recording schedule soon takes a butchering!
Also, Covid restrictions made things even trickier.  We were limited to six actors in the studio at one time for example, which can be a real struggle when a scene has ten actors in it!  I think you learn that everything is surmountable, you just have to be willing to adapt.

Which has been your favourite project to date?

I’ve really enjoyed the adaptations of the classics.  Marty Ross, a writer we often work with, always does an incredible job adapting these mammoth texts for the audio format.  He does so much of the hard work for you, creating gripping action sequences but also incorporating humour and sensitivity.  We’ve done Treasure Island, The Three Musketeers, Arabian Nights…however, my absolute favourite is probably Moby Dick.  It’s a haunting novel and Marty captured that wonderfully, creating a script that ensures the story stays with you way after you’ve listened to it.  I also couldn’t quite imagine how the high sea whale chases would work, but Joe Richardson (our sound designer), plotted them so skilfully that you really feel that you’re in the boat and following the action.  I loved it.

I would say that planning and organisation are vital; you don’t want to be stressing over practical details when you’re in the studio with the eager and enthusiastic performers!  By that point, you want to be in a position where all you’re concentrating on is the voices of the actors and how best to work with them to create the right performance.  You need to know the piece better than anyone else, but also be willing to admit a mistake!

To be honest, I feel a huge sense of achievement whenever we complete a project.  They can be such mammoth jobs that obviously you feel brilliant when it’s finished and you know it’s as good as it can possibly be.

However, the greatest feeling of all is the first morning of recording when you hear the actors lifting the text off the page for the first time and you realise everything is going to be TOTALLY FINE.  They’re going to get you through, be wonderful, but also they’re going to love doing it as they go.  That really helps.
As a result, my proudest moment is the first morning of the Moby Dick recording for this very reason; further enhanced as it was the first in-studio record after lockdown.

I mean, I listen to a LOT of Peppa Pig as our two year old is obsessed with it!  But I’ve just started listening to The Sandman by Dirk Maggs which is just another level.  WOW.

I’ve just finished an adaptation of The Hound of the Baskervilles with Stephen Fry as Doctor Watson.  I’ve loved it.  I feel that we’ve achieved exactly what we’d hoped for, and that’s to bring out the horror elements and try to lighten the traditional feel a little.

I’m about to embark on the second instalment in the Knight Sir Louis series; which is so much fun.  I haven’t worked on many kids books but it’s really cool to be able to be using silly sfx and noises, without such a pressure to be realistic!
Finally, I directed the audio version of JK Rowling‘s new book – The Christmas Pig.  A real challenge as it’s a sort of hybrid book/drama; with a main narrator but all character lines spoken by different actors.  It was fiddly to organise and record, and there was a lot of pressure as there are so many parties involved with a project of this nature, but the result is really strong I think, and it’s a lovely heart-warming story that will hopefully be extremely popular!

David can be contacted at info@wirelesstheatrecompany.co.uk