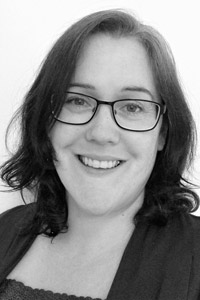 Fiona Thraille has an impressive audio pedigree as a voice actor, audiobook narrator, writer, director, sound designer and producer. Luckily for us, we have managed to tempt Fiona to join us as Wireless Theatre’s new production manager! Hooray! To celebrate our epic good fortune, we caught up with Fiona to learn more about her love of audio drama.

How did you get involved in audio drama?

I studied drama at university, hoping to go into acting and playwriting, but at the point in my life when I discovered audio drama in 2006, working with a very long commute made it hard to fit in much theatre experience.

I was teaching at the time, and the evening after doing a lesson on War of the Worlds, I had the sudden idea of looking up ‘modern independent radio drama’. Pendant Audio was in the search results, and from that night the world opened right up. Here were opportunities for working with drama groups around the world by remote recording. It was utterly life changing and liberating to find a collaborative theatre that was accessible. We eventually moved home, and I was then able to record live and work with people in person, and my love of audio continued.

Which part of the process do you most enjoy? Writing, casting, acting, recording, producing, directing?

This is actually quite hard to answer, as I have had a chance to do all of these, working on very small-scale shows for Dashing Onions Audio, and so enjoying wearing all the hats at times!
I do love acting for its immediacy, the bouncing of energy between the cast, and the fact that then you are actively involved in the finished production at its performance end point.

But there is more creative freedom, in many ways, in the writing and the production side. As an actor, you are auditioning and hoping to be cast in an interesting part in a story that chimes. As a writer, you can choose, to some extent, whose stories are told, and from what perspective, which is also a responsibility.

The production side has a lot of interaction, like acting, but also with the benefit of seeing the project from a further distance, taking in the whole production, enabling those working in each area to do their jobs as seamlessly and happily as possible, which is very fulfilling.

What do you find most enjoyable and most challenging about writing for audio?

The enjoyable side is the sheer scope that audio allows. Even producers working on a shoestring can find free, creative commons sounds in places online such as freesound.org, where people have very kindly donated foley and location recordings from around the globe for use in creative projects (and you can donate your own in return, to add to the community resource). So immediately, as a writer, your options are pretty limitless in terms of ‘visuals’ and in terms of experimentation with styles.

It is a particular way of writing that takes getting used to – if not using a narrator, you need to find ways to make the setting, characters and action clear, because listening tends to be a fluid process – there is no visual reference to keep reminding listeners who is in a room throughout a five minute scene, for example, so if a character is quiet for too long, they can ‘disappear’. Scenes tend to be between small groups of people at a time. Exposition needs to be buried throughout the dialogue so that it doesn’t sound clunky. That can sometimes take a little tweaking, but once you’re used to that, there can be such a focus on dialogue and action, rather than the background, and I do love the intensity of that.

What advice would you give someone who wanted to write an audio drama?

Listening to audio dramas is a good way to steal ideas feel inspired and get a few starting tips! Looking up a standard script format is not a bad idea to save time later, but the most important thing is simply to write. If you have an overall idea what you’d like to do, but no idea where to begin, try taking a couple of your characters and write a conversation between them. It doesn’t have to be part of the plot initially, just focus on how they interact, based on their relationship to one another, their ages, their situation and views on the world, etc etc. I think duologues are far easier to write than monologues, because they can bounce off each other’s reactions, rather than have to dredge up their inner thoughts.

Find some actors who wouldn’t mind reading your work aloud (write intriguing-sounding characters, keep the session fairly brief, and you should find some!). That can really help to highlight what does and doesn’t work in the text, and then you also have their takes on the characters in your head as voices, rather than your own version.

Where do you draw inspiration for your scripts and characters?

Fragments of ideas and characters come all the time from real life, overheard conversations on public transport, art, and occasionally dreams. Note down absolutely everything, no matter how unrelated or unfinished an idea. I wrote a thought as a teenager that only came into being almost twenty years later when I reread it and realised it would work with a recent, completely unrelated situation, and a play was born. Hopefully your ideas will come together quicker than that, though!

My favourite genre to listen to is comedy, or ideally action/adventure comedy. So from Wireless, I particularly love Purdy and Chase and also Drayton Trench, though the dramas are also superb, and Delete was a particular favourite. Outside of Wireless, I tend to gravitate to audio drama podcasts like: The Amelia Project, Wooden Overcoats, Mission Rejected, Oblivity, We Fix Space Junk, The Cryptonaturalist, Victoriocity, Oz 9, and so on, but with the continual blooming of the audio drama world, I’m afraid I’m very behind in listening at the moment!

Just a few days ago, I started working for Wireless Theatre Company as Production Manager, which is an absolute dream job. We’ve been starting to discuss exciting possibilities for future productions, so there will be announcements there!

Otherwise, I am in the post-production stage of “Perfect Retreat”, a six part series by Dashing Onions Audio. It’s a thriller with a supernatural edge, but set in an otherwise restorative environment on an artists’ retreat, which the cast have contributed to with their own songs and music. The trailer is available on the Dashing Onions Audio feed.

Fiona can be contacted at info@wirelesstheatrecompany.co.uk